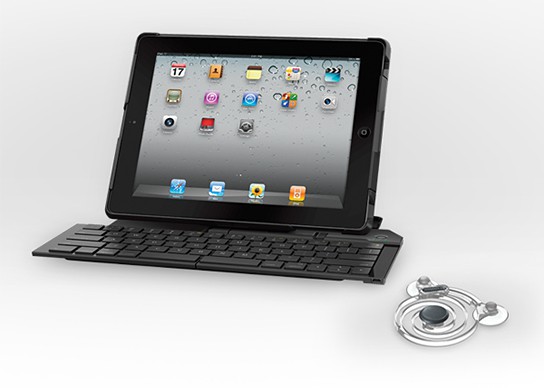 Logitech has announced a couple of new accessories for your iPad that addresses both work and play department of your life with your iPad. the first is the Logitech Fold-up Keyboard for iPad 2 that, unlike the conventional folio-style keyboards, features a full-sized keyboard for ease of typing. though it is not purportedly dubbed as a case but the keyboard attaches to the back of the iPad 2 much like one. when not in use, the folded keyboard turns off automatically and hide neatly underneath your iPad 2 – acting as a form of protection for your tablet. once unfolded, the keyboard wakes up instantly and is ready for you to use. the best part is, the Fold-up keyboard works seamlessly with your Apple Smart Cover too.
[ad#Google Adsense-text-468×60]

next in line is the Logitech Joystick for iPad. now, if you think you might have seen this somewhere before, you are totally right. this Logitech item looks like a splitting image of the Ten One Design’s Fling which we have featured here earlier this year. the basic functionality is the same: it allows for a more tactile feel gaming experience on your iPad. i can’t help but to think they are the same item but in anyway, apart from the suction cups and the clear plastic design, the Logitech’s Joystick also boast a coiled spring design that provides the joystick with auto-centering capability. then again, that’s probably the only clear difference but as far as a layman is concerned, they look pretty much the same. it even comes with a similar drawstring carrying pouch just like the Fling. i wonder will there be any legal implication on this?

anyway, i am not huge fan of gaming on iPad but the Fold-up keyboard does have a more practical appeal to me. expect this duo to hit the stores soon but both item are available for pre-order from Logitech website now. the Logitech Fold-up Keyboard for iPad 2 is priced at $129.99, while the Logitech Joystick for iPad cost $19.90 a pop.