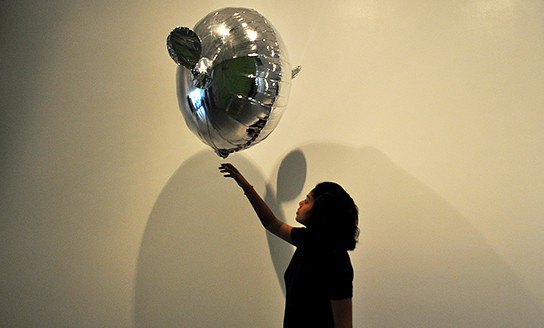 we didn’t get to feature the remote controlled blimps that were quite an attraction during the last toy show but here’s one that you can make yourself while taking it a notch up. meet Ollie, the autonomous and ambient robot that has an Arduino for its brain, microphone for its ears and cute, undersized wings for maneuvering. Ollie is very much alive. he floats around, reacting excitedly by flapping his wings when you speaks or claps.
[ad#Google Adsense-text-468×60]

Ollie is like a fish, randomly exploring the environment around him with much curiosity and interacts with whoever wants to. initially, i wasn’t quite convinced by his mannerism as described by his creator until i saw the video. Ollie represents a part mix of technology and creative art. unfortunately, you can’t buy Ollie off the shelf but the good news is, you can build one yourself by following the instructions over at Instructables or Ollie website. Ollie is available under the Creative Commons Attribution-ShareAlike 3.0 Unported License.