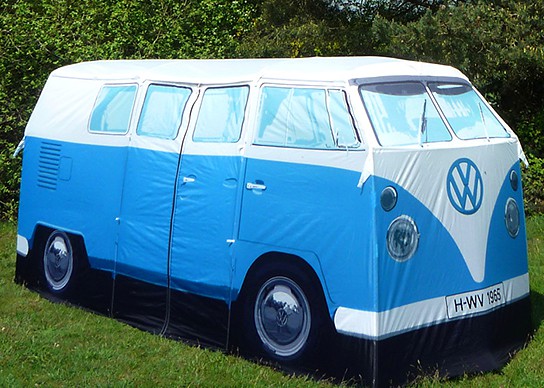 the VW Camper Van tent is set to bring back fond memories of the yesteryear’s iconic 1965 VW Camper Van. in fact, this officially licensed product (by Volkswagen, of course) is the same size as the original 1965 T1 Camper Van. it’s 182.5 centimeters (5.99 feet) height lets tall person stand within without hunching over and is able to accommodate up to four adults. in case modesty is a big issue while camping out, the internal can be zip-separated into two ‘rooms’.
[ad#Google Adsense-text-468×60]

everything is looking sweet but there’s just one more thing. this straight edge, boxy tent may look like the iconic van but it might just not for the Asia market like China or for any traditional Chinese for that matter. for those uninitiated, there’s a part of the Chinese tradition that burns paper representation of the real world items for the dead, scaled down Mercedes-Benz included. it is believe the dead will be able to use them in another life and for most of these paper items, they are of square, boxy item – just like this camper tent. that said, you can be sure that most Chinese in Asia will not want to be seen dwelling inside one of these campers.

the VW Camper Van Tent is available in three colors, namely Blue, Red and Yellow and will set you back at £299.99 (US$486). not exactly cheap but for those who wants to relive those hippies era, this could be the ‘van’ to do it in style while not causing any harm to environment with those dated engine’s smog. well, except for some patches of dead grasses.