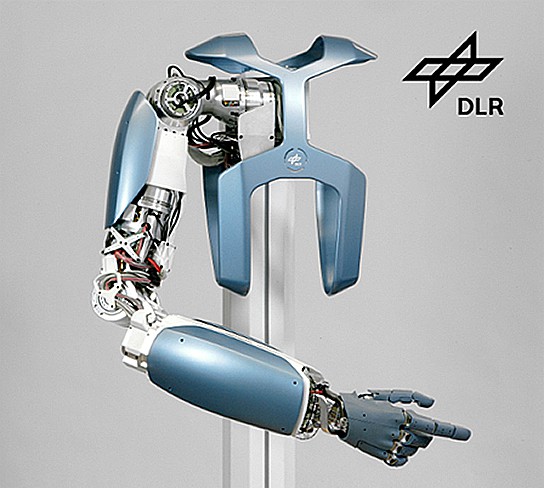 we featured a similar indestructible arm by German Aerospace Center (DLR) earlier this year and it looks like the original Terminator-look arms has been further tweaked and was given a whacking once again. again, the robotic limb proved that it can take on a bashing and still maintains its functionality. this time round, the arm has less exposed wirings and parts, and is blessed with a la-I, Robot-style shell.
[ad#Google Adsense-text-468×60]

check out a short clip of the bashing with a baseball bat after the break and witness for yourself. on a bigger picture, you can see the arm is reacting like a real human arm with its reaction to the pushes from the researcher. a real human arm will tend to move a little or more depending on the forces exerted on them, which is what this latest iteration has exhibited in the demo video. dubbed the DLR Hand Arm System, this anthropomorphic system is packed with 54 motors, ultra-miniaturized control electronics, a supercapacitor-based power supply, and a web of synthetic tendons that is said to be stronger than the Kelvar material.

together with clever designs of the joints and actuators, this particular arm is totally capable of absorbing and dissipate shocks introduced to it. it’s pretty awesome, huh? oh yes, maybe we won’t have a Terminator coming to us, perhaps a Sonny? that sounds a little more comforting, isn’t it? all is lacking is an evolving artificial intelligence for them and we on our way to our own destruction or success, depending on how you look at it.