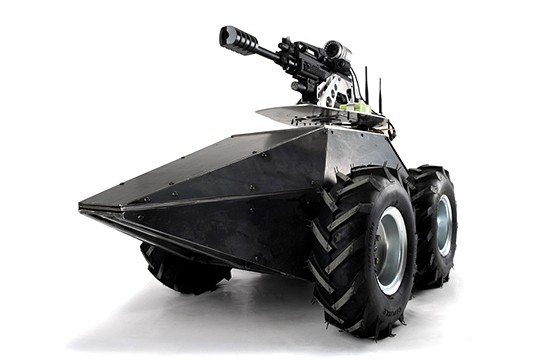 i have never tried paintball and till today, i’m still contemplating to do so. however, if the Mega Hurtz becomes a reality, i want to be the guy operating it and not being chase by it in a game of paintball. the name alone sounds menacing enough and it doesn’t help that it has a paintball gun mounted that’s capable of 13 rounds per second. designed by RC enthusiast, Chris Rogers, the Mega Hurtz looks any other unmanned land vehicle that are a common place in battlefield today. featuring a 4-wheel drive mechanism and clad in steel plated body, this 280 pounds machine is cable of breaking through concrete walls and powerful enough to tow a hummer.
[ad#Google Adsense-text-468×60]

the Mega Hurtz has everything onboard that are necessary for it to hurt down its opponent. these essentials range from video camera with IR night vision capability, red laser sights, barrel cam for a more accurate aim and tactical lightings. with a range of 500 feet, it has more than enough coverage for a merciless take down of your opponent in a paintball battleground. the Mega Hurtz is a wheeled vehicle, however, Chris is asking for support over at Kickstarter to further improved its Mega Hurtz. some of the improvement includes pan and tilt of the mounted gun, using of track instead of wheels which will enable it to climb stairs et cetera.

needless to say, Chris’s Mega Hurtz would have other application other than just paintball. one could easily imagine its adaptation for both military and disaster rescue unit usage – well, especially military, where its rugged and robust build could come in handy in the harsh battlefield environment. check out more images of this beautiful machine and a clip of the Mega Hurtz after break.

NOW READ  You Heard It Is Going To Be Available, Now You Can Finally Buy Spot Robot Dog For US$74K

The Mega Hurtz via Oh Gizmo!