looks like the 2014 Mercedes-Benz S 65 AMG won’t be too lonely at the upcoming 43rd Tokyo Motor Show later this week – its gull-wing sibling, the Mercedes-Benz SLS AMG GT Final Edition will also be strutting its stuff there too and as the name implies, this particular SLS AMG GT will also mark the end of the era for this series. limited to just 350 units, this super sports car from the pointed star marque is powered by an AMG 6.3-liter V8 engine, mounted in front-mid configuration, turns up 591 horses (435 kW). powerful and celebrated as the engine is, nothing more iconic and legendary then the SLS AMG’s gull-wing doors which set itself apart from many cars of its time. first introduced back in 2009, the SLS AMG has established itself as the de facto icon of the Mercedes-Benz brand and through out the years, it has see a variety of variant including everyone’s favorite gull-wing model, roadster, GT, the Black Series, as well as the electric drive.

so, will it become rich boy’s collectibles like the 300SL? we suspect it might. the special retiring model will, presumably, available in both hardtop and roadster versions and treated to a special two-tone paint job, however, just exactly how many colors will be offered is still a mystery. in fact, Mercedes has little information to say, choosing instead to highlight on the S 65 AMG (logical move, i guess). like the S 65 AMG, the Mercedes-Benz SLS AMG GT Final Edition will also be making its appearance at the Los Angeles Auto Show as well. no word on when it will go on sale or how much will it cost, but the air should be cleared by this week. no? another look after the break. 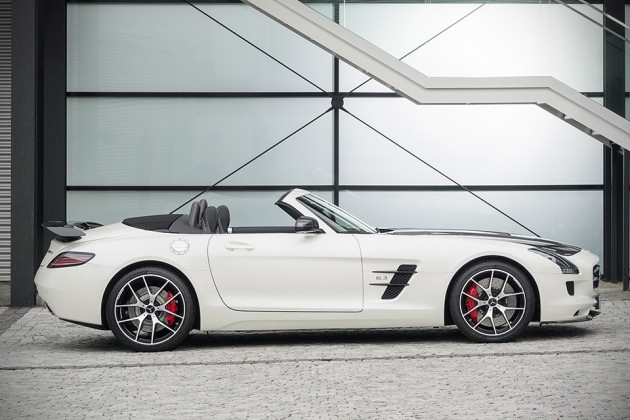