Marking the opening of the new Product Engineering Center in Beijing, Mercedes-Benz has unveiled a sports utility coupe (SUC) study known as Vision G-Code. If the name sounds a little sci-fi-ish to you, that’s because it is. G-Code is the pointed star marque’s interpretation of the future compact SUC, or cars of the future for that matter, and one that’s loaded with technology imaginable and with a form to match too. It sports a coupe-styling in a SUV form with dynamic flowing lines accentuated by a continuous glass area wrapping the vehicle like the cockpit of a powerboat. On the roof, retractable roof rails maintain the aerodynamic efficiency when they are not needed and it has a ‘chubby’, yet sporty appearance attributed by its super compact 4.1m long body, short front and rear overhangs, enormous 21-inch aluminum wheels with delicate carbon fiber spokes, and a taller ride height signifying its willingness explore beyond paved roads.

There are no side mirrors, instead it has two small cameras, which retracts into the invisible A-pillar when parked and up front, it has a front grilled inspired by Starship Enterprise from Star Trek TV series which Mercedes refer to as the “warp drive”. This “warp drive” is a continuous display surrounding the central three-point star and the pair of chrome louvres that mimics the sci-fi spaceship’s warp main drive, displaying the vehicle current operation mode. For example, the tiny digital starts light up blue when it is in all-electric Hybrid eDrive mode and changes purple in mixed Hybrid eco mode. The futuristic digital radiator grille, though unique, is unlikely be a staple in future cars. Just in case you’re wondering how or where the heck the engine gets it cool air from with ‘blocked’ radiator grille, well, there’s a series of apertures at the side and the bottom that addresses the cool air needs, but how effectively, we can’t be sure.

Continuing the futuristic expression is a single rear LED light strip across the rear that is home to the various illuminations including turn indicators, taillights and brake lights. But the rear lights and everything else we have listed thus far are nothing compared to what its concept of “decentralized generation of electricity” proposes. In addition to the traditional electric generation through regeneration or plug-in technology, Mercedes envisions that the electricity needed by the car can be generated throughout the vehicle, starting with a high-tech “multi-voltaic silver” paint work that acts like a massive solar cell, turning natural light into electricity for the vehicle. 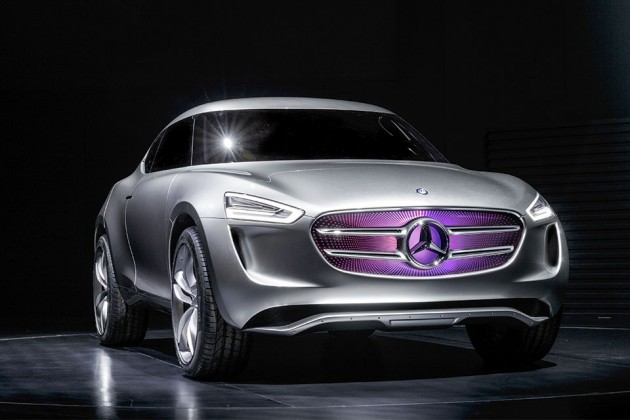 Additionally, this special coating also charges electrostatically by the relative wind or by the natural wind when the vehicle is not moving. These harvested energy are then used for the methane and hydrogen synthesis to power the vehicle. Speaking hydrogen, the SUC study is a part hydrogen drive vehicle with a compact, advanced turbocharged internal combustion engine running exclusively on hydrogen that drives the front, with the rear is powered by electric motor. Though essentially an all-wheel drive vehicle, the Vision G-Code can also run as a rear-wheel drive vehicle or as a front-wheel drive vehicle too. The energy harvesting does not end with the high-tech coating; even the suspension is setup with a compact current generator to put the energy from the rebound of the springs and dampers to good use.

The amount of tech Mercedes-Benz engineers have dreamed up for this study is astonishing and and we don’t even want to get started on the interior (pictured below) – it is simply fabulously futuristic, which to be honest, have us lost for words. You can learn more about this ride of the future proposed by Mercedes-Benz HERE. 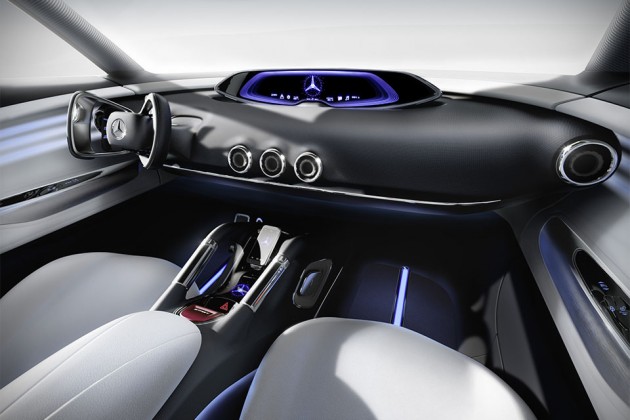 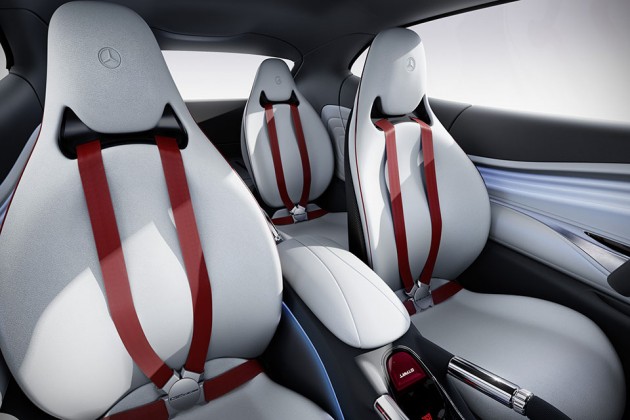