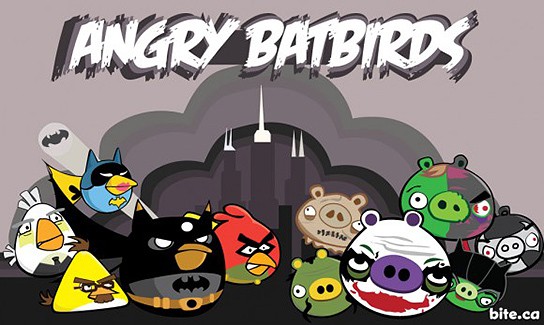 it is hard for mobile platform game to grow beyond where it belongs: the mobile device but as for Angry Birds, it is not destined to be caged within it. it has gone from Halloween Angry Birds costume to Angry Birds birthday cake, to gracing the cover of mobile devices case. television network Bite, is not about to keep mum about the popularity of this accidental angry avian hero. its creative designers, Daniel Halyburton and Jennifer Herd gave the perpetually furious avian and friends, the superheroes and villains makeover. the superheroes and villains are none other than the cast from Batman. these angrily cute game characters are dressed in the familiar characters such as Batman, Robin, Commissioner Gordan, The Joker, Catwoman, among the many others which i thought looks pretty awesome. bear in mind that i’m not a huge fan of angry birds, much less a fan. needless to say, the lead superhero is none other than the furiously red angry bird. check out the images below and judge for yourself.
[ad#Google Adsense-text-468×60]