going on a product naming route similar to Apple’s computer, the second generation Motorola Moto X, which was announced two weeks ago, is still called Moto X. besides the name sharing, the second generation Moto X also looks pretty much like its predecessor with rounded corners, a curved back and most prominently, a rear camera just above the Motorola logo. however, under the hood, it is anything but similar. the most notable difference is the size. it now sports a beautiful 5.2-inch AMOLED display, boasting 1,920 x 1,080 pixels and a cool 423 ppi. dig deeper, there is a Qualcomm Snapdragon 801 chip with 2.5GHz quad-core processor and 2GB of RAM. 16GB storage is standard, but 32GB is also available through MotoMaker. 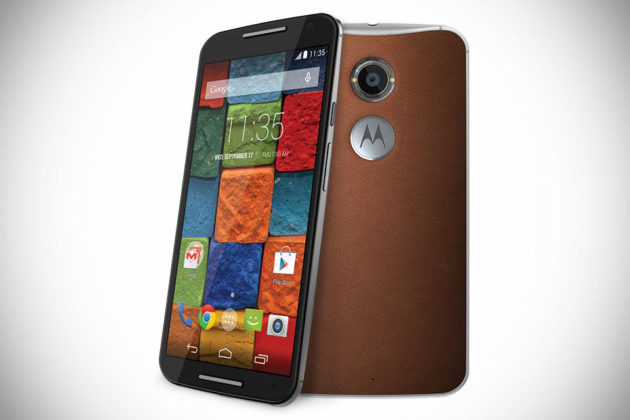 other details include LTE radios, Corning Gorilla Glass 3, a 13MP main camera with Quick Capture, LED flash, slo-mo and 4K videoing, a 2MP 1080p front-facing camera, front-facing speaker, a quadruple microphone setup with next-gen Crystal Talk technology, dual band wireless 802.11a/b/g/n/ac, WiFi hotspot, Bluetooth 4.0, and a 2,300 mAh, touting mixed usage of up to 24 hours. the second generation Moto X is also equipped with four IR sensors, necessary for the new gesture features which allows you to wave your hand over it to snooze alarms, silence phone calls, or wake it up from sleep. if you opt to go with the MotoMaker route, you get to customize it with one of the 25 back finishes that include a choice of colors, wood options, plus four genuine leather.

the device runs on Android 4.4.4, which are mostly untouched except for a few tweaks, such as Moto Actions and Moto Assist. it also features customizable prompt to whatever you fancy, instead of the usual ‘Ok, Google’ and you can also use voice to post to Facebook, paid a video on YouTube or send a message with Whatsapp. size-wise, it is obviously, significantly larger than its processor, but surprisingly, it is a tad thinner at 9.97mm. also, the handset is treated to guard coating to shield it against light splashes, so there’s no worry being caught in a sudden (light) downpour. the new Motorola Moto X for $99.99 with contract or $499.99, contract-free and unlocked (referred to as the ‘Pure Edition’). aside from the U.S., the Moto X will also be available in Latin America, Europe, as well as Asia, sometime later in 2014.