You know the key to winning a NERF battle? Firepower. But shit load of firepower won’t be enough – you need a blaster that has unlimited ammunition, like, you know, one that fires forever. Of course, we all know that’s a fantasy, a Hollywood kind of thing, or a possibility only if you enter cheat code in a game. So for now, as far as real flesh-and-blood foam ammunition battle is concern, the NERF Rival Nemesis MXVII-10k Foam Ball Blaster you see here is as close as you can get in getting an upper hand in a NERF shoot out. 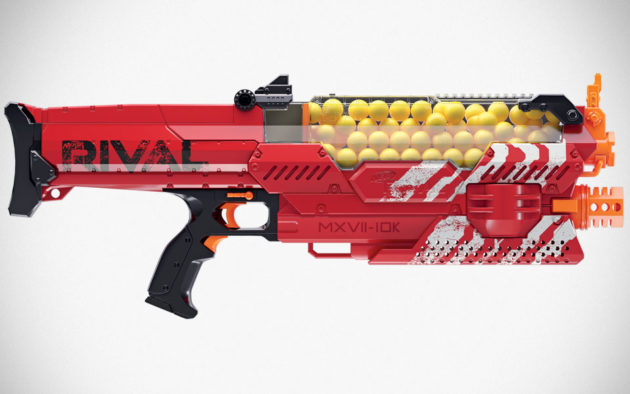 Its ammunitions, which are tiny foam balls, will end after you have expended all 100 of them. Wait. Actually, no. You don’t even have to pause to reload because your sidekick can quickly introduce fresh ammos as you are pulling on the trigger, so you can keep your suppression fire going to keep your opponents’ heads down for as long as you have supplies of the yellow foam balls, or at least, until the six D-sized batteries (or NERF-branded rechargeable battery pack) conk out. So, yeah, the NERF Rival Nemesis MXVII-10k Foam Ball Blaster is, in a way, a fantasy ammunition-won’t-end blaster made real.

And the real thrill about this new blaster? It still fires as fast, at up to 70 miles an hour (112 km/h!), like its lesser capacity predecessor. So, there you have it: capacity and speed – the two traits that are going to help your team bag the flags. Seriously, don’t pretend that you aren’t excited. NERF Rival Nemesis MXVII-10k Foam Ball Blaster is expected to hit the market later this year, priced at around 100 bucks.

Images and source via Gizmodo