I am sure we are all quite familiar what NERF has to offer. This Hasbro’s line of blasters shoots foam darts, isn’t it? Well, about that, it is not quite true anymore because NERF’s diversification has lead to it shooting, wait for it… foam cars. Yes. Yes. NERF’s new line of blasters that is slated to hit the shelves worldwide in summer 2017 doesn’t shoot foam darts or balls. Instead it will spit out foam cars and thereby pulling a Hot Wheels kind of toy line but without the fancy, roller coast-style tracks. Hard to imagine? Well, it is really not hard to imagine. Just think of it as a Hot Wheels launch-able car, less the track and has the launcher in the likeness of a NERF foam blaster. Get it? 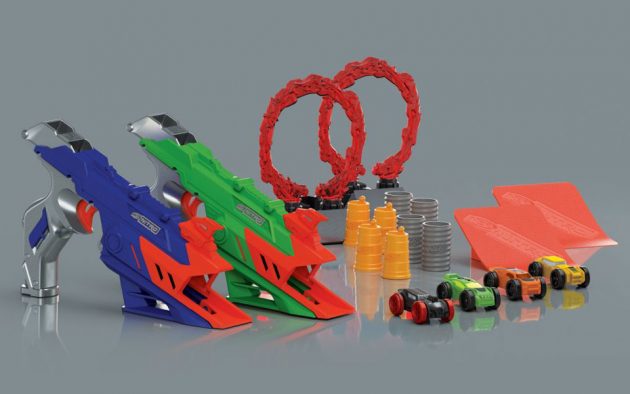 Also, this ‘blaster’ is not designed to be wielded like a gun; instead it is designed to stay put on flat surfaces, such as the floor or a table, and has the ‘muzzle’ (which is really a launch ramp) angled downwards at the flat surfaces. I know. It does feel like a bit of stretch to try to call a toy car launching mechanism a NERF Blaster, but it is what it is and it is either you love it, or you are absolutely disgust by it. It remains to be seen how will the market react to this whole new type of blasters. As for us, we are still coming to term with a blaster that doesn’t shoot form darts or balls.

NOW READ  This The Office Hardcover Book Is Rebooted For Children

Putting aside the argument of whether it is a blaster or not, NERF Nitro, which is targeted at kids ages five and up, is essentially a stunt toy car set that lets you do what tracked Hot Wheels cars do but without the constraint of, well, tracks. The whole idea is to spur imaginations and creativity in younglings which can very much agree to it will. At launch, NERF Nitro will serve up over 48 vehicles designs and it will come in sets too, ranging from the 24-piece Motorfury Rapid Rally set, to the two-launcher Duelfury Demolition set. Prices are expected to range from $9.99 to $49.99.

Images and additional information via Forbes