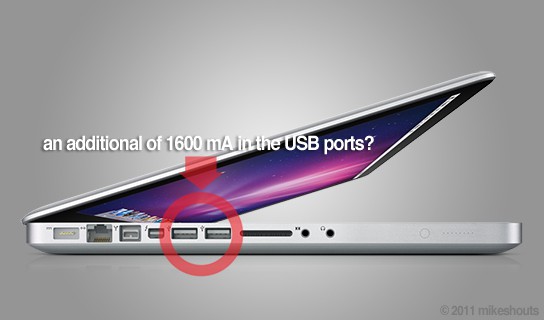 it may surprise some that there is an unpublicized feature in the new MacBook Pro, that is, it sports an extra 1600 mA of current in its USB ports. the higher current means your iPad could be charged up as fast as they would from a standard wall socket. for the uninitiated, the 1600 mA is extra on top of the existing 500 mA, making it a total of 2100 mA. i don’t know about the rest, but it is certainly a welcome addition as i just got my new MacBook Pro to replace my two year own unibody.
[ad#Google Adsense-text-468×60]

9to5 Mac via CrunchGear