After having a hovercraft as his golf cart, American pro golfer Bubba Watson has once again stir up the air on the fairway, this time with a jetpack golf cart, specially prepared by Martin Aircraft Company – the New Zealand aviation company that’s rooting on its jetpack to be the personal air transport of choice. And why not? That’s like the dream of every man and the military since like forever, and an obvious choice for the world’s number 5 golfer who is always gunning to take his game to a new height. Since golf is making a comeback at the Olympics, there isn’t a better time to unveil the world’s first jetpack golf cart, the BW-Air. 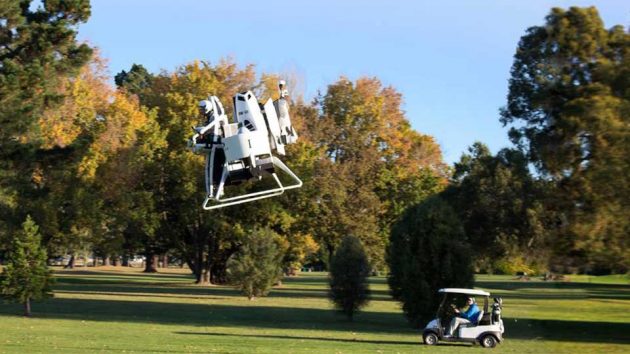 Bubba once again teamed up with Oakley and worked with Martin Aircraft Company to create a jetpack that can carry a full-size golf bag and while the jetpack’s 200 horsepower engine that drives a pair of ducted fan is capable of a 3,000 feet ceiling, we doubt Bubba ever need to get that high up to clear the trees or whatever hazards that stands between him and the dimpled ball, and with a top speed of a little under 50 mph, I am sure Bubba game of golf would be way faster.

But don’t expect Bubba Watson to be zipping across the sky of Campo Olímpico de Golfe in Rio de Janeiro this August cos’ we are pretty sure IGF won’t approve of it. The downwash itself, which will risk moving the already settle ball, is good enough reason to shoot this down as a real way of carting around the fairway. But what do we know? Even the hovercraft golf cart made it as a real thing and it shouldn’t be farfetched to have a jetpack version, isn’t it? After all, Martin Aircraft Company’s jetpack is eventually going to be part of every rich man’s life. Speaking of which, Bubba happens to be third in line for a Personal Martin Jetpack and he will join those who reserved theirs in the pilot training course once the jetpack is certified and made available in the open market.