Sci-fi movies and novels have almost describe a future where robots replacing humans in a variety of jobs, if not taking over the world entirely. Some people people are skeptical that will actually happen, arguing that there are some jobs that no robots can do. But is it, really? Because a Japanese company, OMRON Corporation, has developed a robot that can effectively coach someone tablet tennis, AKA ping pong, which earned it the Guinness World Records title of the First robot Table Tennis tutor. So, sport coaches, your jobs aren’t very safe either. 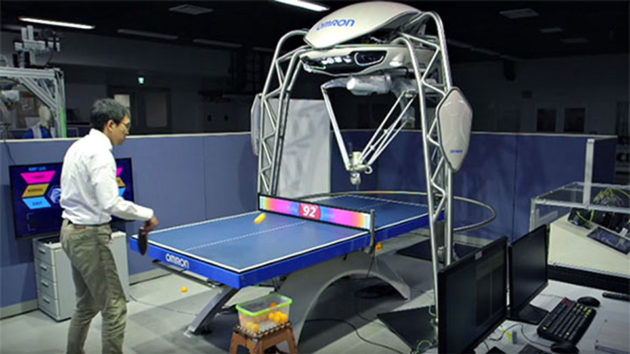 OMRON calls the machine FORPHEUS, which is acronym for Future Omron Robotics Technology for Exploring Possibility of Harmonized aUtomation with Sinic Theoretics, which is quite a mouthful and so, we are good with just FORPHEUS and knowing it as a robot that teaches Table Tennis. Anywho, dear FORPHEUS here combines sophisticated artificial intelligence with visual and motion sensors to engage ‘student’ in a game of Table Tennis and in the process, dishing out tips, advises, encouragements, which are displayed on a LED display affixed to the net.

The machine, which props over one end of the Table Tennis table, is a rather ominous sight. It kind of reminds us of the Tripod in Steven Spielberg’s adaptation of H.G. Wells’ 1898 classic sci-fi novel, War of the Worlds (2005, Paramount Pictures). The only saving grace here are, it is not mobile and it does not (yet) have a mind of its own. The sight of an alien-ish robot hunching over a Table Tennis with a pair of “eyes” staring down at you can be quite creepy and that’s no including how fast its paddle equipped limb can react to an incoming projectile, or in this case, a ping pong ball.

Teaching robots to teach humans is just the beginning. According to FORPHEUS lead developer, Taku Oya, it could progress to robot teaching robot, or even a robot developing a robot. Yikes. That almost sound like Skynet in the making, isn’t it?