You know how people used to say old Volvos are built like tanks? The saying was probably stem from the marque’s proven track record of survivability in accidents – thanks to the company relentless pursuit of safety since the 70s. My dad used to own a Volvo 200 series that hailed from the 1980s and boy, were the doors thick like a tank’s armor (figuratively speaking, that is) and while thankfully, we did not met with any accident, I can only imagine the ultra thick door probably would have stood up to most impacts. Anyways, as it turns out, someone may have took the aforementioned saying a little too literal by turning his (or was it her?) V70 into a road-going tank, or at least, one that bears an uncanny resemblance to a tank. 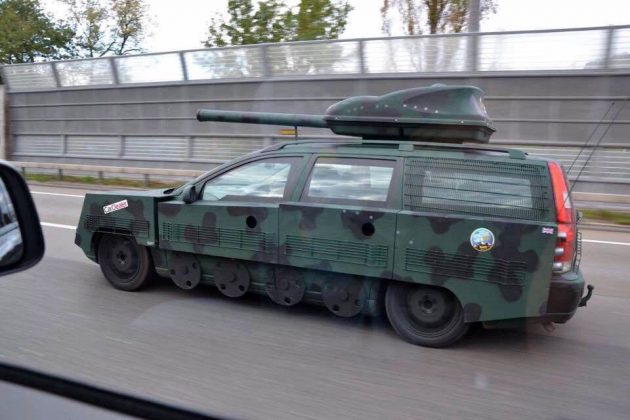 This slightly out-of-this-realm customization is the first of such we have seen and I am not going to lie, I am both bewildered and impressed at the same time. What used to be a regular V70 station wagon now has the full-fledged look of a tank. It has all the works that makes it a ‘tank’, including additional panels up front and on the sides that presumably represents the armor of a tank (complete with slatted vents! Holy shit!), fake road wheels stuck to the sides to recreate the tank track set, anti-riot mesh grill on the third-row side windows and in the cleverest mod ever, the owner has its roof box converted to look like a turret, complete with a PVC pipe as the main armament of Volvo V70 ‘tank’ (and looks like it had a ‘gun stay’ too!).

Rounding up the mod is a camouflage paint job of brown and green. Unlike most mods, what this owner did was without a doubt detrimental to the car’s performance, but really, who cares when it’d blow its competitions away?