if you are huge RC aircraft enthusiast, you have probably heard about the mythical beast, a radio control, turbine jet-powered dragon that breathes fire (note: not a typo). in fact, this RC Fire-breathing Dragon has been popping up in RC shows all over the country over the years and needless to say, the creature and its creator, Richard Hamel, has been getting some well deserved attentions. the RC Fire-breathing Dragon is as mythical and elusive as the mythical creature we have read about, but thanks to the purveyor of all things luxe, Hammacher Schlemmer, you will be able to lay your hands on one – IF you have $60,000 to drop. 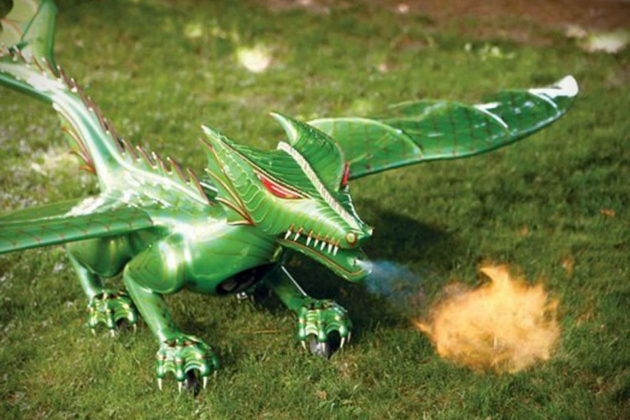 put cost aside, this is a bit like a dream machine. it has a beautifully painted fiberglass body, a v-tail configuration – complete with turning head to aid in turns during flight, a Jetcat P80 turbine that pushes out nearly 500mph of thrust, soars through the air at up to 70 mph, menacing glowing red eyes for some visual effect, and last but not least, it has a flamethrower built into its mouth. fire is created by igniting liquid propane with a 50,000V stun gun circuit, and by the virtue of the liquid propane, the fire won’t realize until it clears the mouth, so you know this 9-foot wingspan beast won’t have a burnt mouth when spewing out fire.

60k is sure a hell lot of money for a radio control toy, but how many can say they have power over a dragon that spits fire? keep going for a couple of videos (including one in-depth look at the dragon that dates back to 2012).