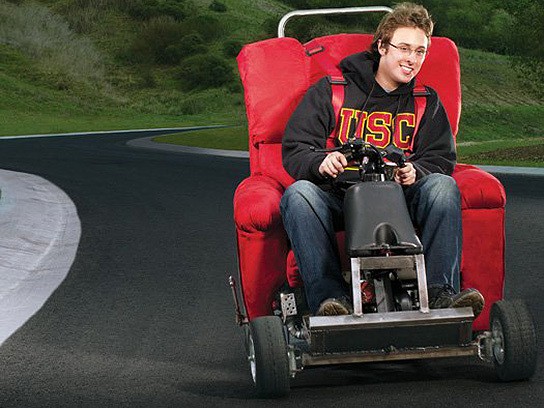 we have seen the fastest dinning table, now meet the 40 mph recliner chair. while it may not be a record holder, but according to its builder, at least it roars like a Harley. Chris McIntosh is the brain behind this sleek motorized chair that took him 18 months to complete. it all started when his 15 mph electric-powered recliner chair’s motor burned out and the wicked idea of turning it into a quicker chair struck him.
[ad#Google Adsense-text-468×60]

under the hood (or should i say, under the chair) of this striking red monster chair is a four-stroke dirt bike engine that makes a healthy 9 horsepower and feature electric shifter for gear changing. throw in some safety features such as front counter weight, roll bar, safety harness et cetera and it is good to go. there is no suspension, so the ride could get a little bumpy if not for the well padded chair. though fully functional, Chris’ red hot ride is not street legal, so it is designed to fit into the back of his hatchback car and can be transported to wherever Chris wants to ride this little red monster.