Just when we thought smartphone technology has come to a standstill, researchers at Queen’s University’s Human Media Lab announced a prototype smartphone that leverages on the flexibility offered by bendable display. And mind you, these brilliant minds did not make bendable display – that has been done; instead, the lab created the world’s first full-color, high-resolution and wireless flexible smartphone, complete with multitouch and mind-blowing bend input. If you think smartphone lacks of the tactile feel, then ReFlex Flexible Smartphone will give you hope that tactile feel may one day become standard in future phone.

Making the flexible smartphone including slapping a 720p LG flexible OLED touch display with bend sensors, haptic feedback motors, and an Android 4.4-powered board loaded with custom drivers. The power board is mounted on the non bending end, while the bend sensors and haptic feedback motors are built into the back of the device. The bend sensors are in itself a form of input where developers can incorporate into their apps. For example, in the case of an ebook, bending the device backwards initiate the act of flipping through the pages, and the more you bend, the faster it will flip – just it would with real books or magazines. 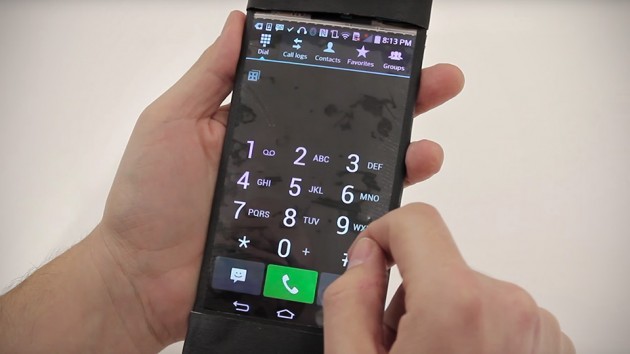 However, it is not limited to ebooks. Games like Angry Birds can take advantage of the bend sensors too. Instead of the usual touch and drag gesture, user bends the screen to stretch the slingshot and releases to make the shot. Thanks to the incorporation of voice-coil haptic motors, user will feel the slingshot stretching out like a real rubber band and experience the jolt when it is released. And the best part is, it is still a regular smartphone which you can still have touch controls and of course, make calls. With this development, we have no doubt ReFlex FlexibleSmartphone will pave the way for future flexible phone. Furthermore, being bendable and and compact, it could only means our time with fragile devices is almost over.

NOW READ  Do You Know, Howitzer Gun Suppressor AKA Silencer Was A Thing?

Seriously, we can’t wait for flexible smartphones to become a standard. However, the good news is, we probably won’t have to wait an eternity as Dr. Vertegaal, director of Human Media Lab, thinks that “bendable, flexible smartphones will be in the hands of consumers within five years.” Possibly sooner, if businesses picked up the idea and how-to behind ReFlex. In the mean time, the team has presented the device at a human-computer interaction conference yesterday in the Netherlands.