Caricature of automobiles look pretty cute, aren’t they? With oversized, fat wheels and a plump, short body, these fantasy automobiles look totally cartoonish and they don’t exist in real world, or do they? Well, actually, they do – thanks to Ron Berry’s magic hands. Ron is an avid car customizer with an alternative taste: turning real world cars into cartoon custom creations and his latest work, “Surf Seeker” Custom VW Bus, which is based on a Type 2 VW bus, looks like something straight out of The Road Runner cartoon series. It is not hard to imagine Wile E. Coyote behind the wheel of this sweet custom VW bus, trying to run down our dear Road Runner. 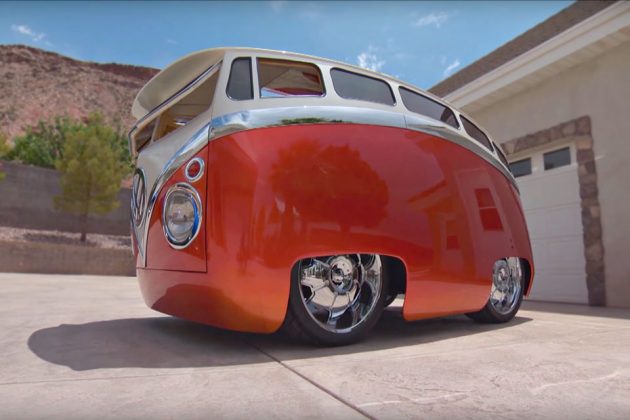 As you can see, this cartoon artwork-inspired vehicle is pretty surreal, sporting a total of 24 windows, including safari-style windows front and rear, and comes complete with cartoon-style surf board, which obviously you can’t actually use it. Basically, everything about this ride is as cartoonish as it can gets, from the cartoon proportion body to the massive 24-inch rolling stocks to the oversized headlights which, interestingly, was made up of salad bowls bought off Walmart. And the lack of handles make the vehicle look even more sleek. 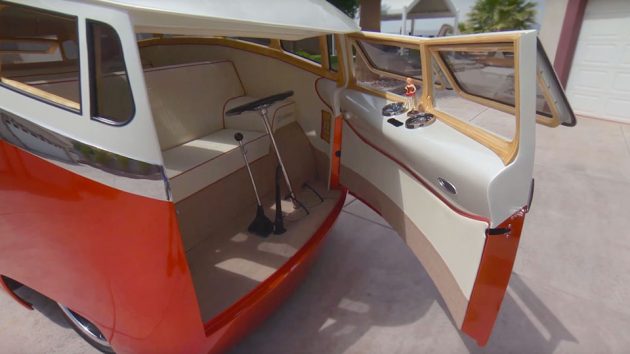 With the exception of the windows, everything that can be opened are activated using a key fob – even the retractable wheelie bars too. Yes, it has those too and they ain’t no regular wheelie bar though; the wheelie bars are fashioned to look like skateboards, or surfboard with wheels. So, while it may look retro-ish, it is actually pretty high-tech. Though it may be a VW bus, it has little of the original vehicle’s DNA, except maybe for the motor, which boasts an air-intake designed by B&M and drag race star Dick Landy, front control mechanism and stuff like the transaxle. But how much of VW DNA is insignificant here cos’ the result is mind-blowingly awesome enough to make me want to scream: “I want need one and I want it now!” 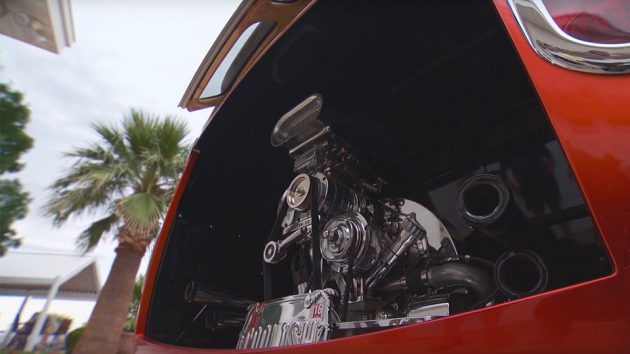 The bulges associated with its cartoon styling also bumped up the inside space, providing more headroom and generally, a significantly roomier cabin. Speaking of the cabin, it’s clean, minimalistic interior was partly attributed by powerful rare earth magnets that keeps the interior panels in place which negates the need for unsightly screws and fasteners. Also on the inside, suitable amount of wood helps to bring out the 60s feel, while a front opening door with integrated dash like those found on the BMW Isetta, along with road couches serves to further reinforcement the vehicle’s unique retro look and feel. Though we must say the dashboard hula girl has a part to play too.

It took Rob 17 months to build this beauty with most of the bulging body parts hammered out by the man himself and boy, it is a real looker. Keep going to watch My Classic Car’s coverage of this wonderful custom cartoon creation. 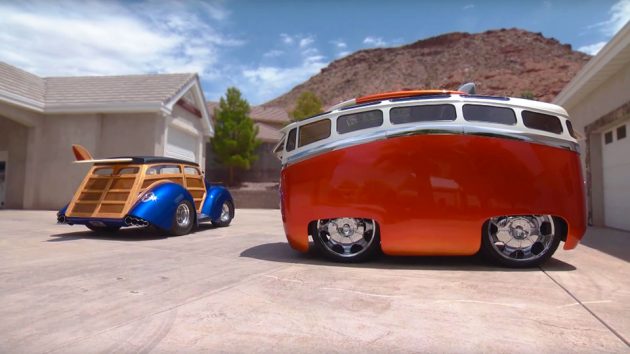