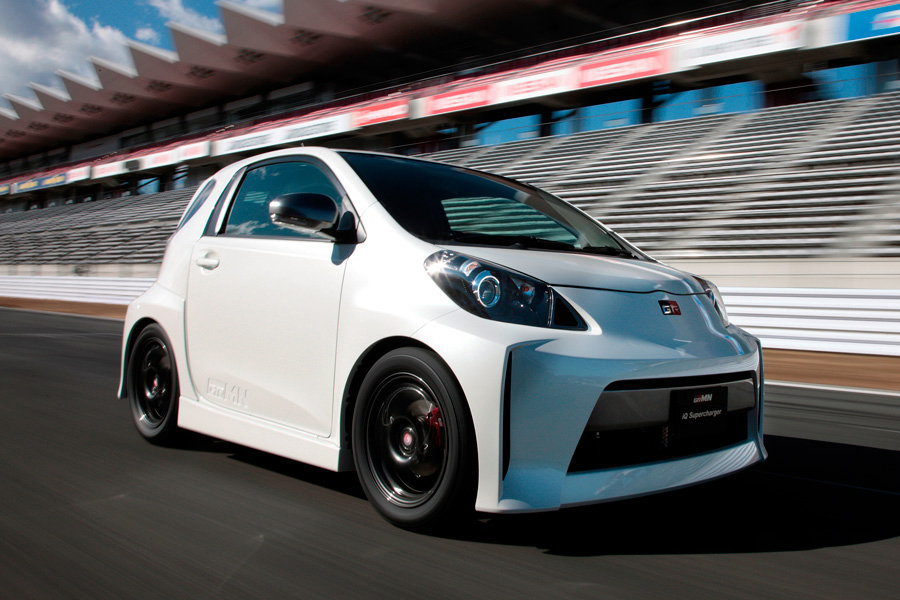 we love sporty cars and the numbers that comes with it but big block sports car just tend to eat into our conscience and hurt our wallet with its higher fuel consumption. on top of that, rapid urbanization means more congestion that makes big cars impractical and that’s why we turned our attention to compact hatch that still have the performance we crave for and the look to go with it. the Toyota GRMN iQ Supercharger Concept is just one of those ultra compact that have our attention. based on the Toyota iQ 130G MT→ (arrow mark pronounced as “go”), the GRMN iQ Supercharger sports an aggressive body styling that includes blister fenders, newly sculpted front bumper and rear spoiler but that is just a hint of its performance lurking under its hood. powered by a supercharged 1.4-liter 4-cylinder petrol unit, the GRMN puts out a healthy 129 horsepower (96 kW) and yields a pretty amazing 180 Nm (133 lb-ft) of torque. no official sprint figure was given but given its light 990 kg (2183 lbs) mass and its six-speed close-ratio manual gearbox, the GRMN iQ should be pretty quick in the acceleration department. other features include specially-tuned suspension, exclusive brake pads and rotors, specially-tuned dual mufflers, 16-inch Enkei alloy wheels shod in 195/55 R16 rubbers, sport seats and 200 km/h speedo gauge. the GRMN iQ Supercharger is a second-generation GRMN supercharged ultra compact scheduled for launch this summer with a limited run of just 100 units. no word on its pricing or if these fine examples will be heading elsewhere other than the land of the rising sun. click on the above image for a larger view.