For connected freaks who are irked by the fact that your plain smoke detectors in your high-tech home aren’t connected, well, a startup has the perfect solution called Roost Smart Battery. Shape and weight like a 9V battery typically used in smoke detectors, Roost Smart Battery is WiFi connected and when installed, turns your humble smoke detector into a smart, connected smoke detector that will do the following: warn you in advanced when the battery is low and send you alerts when the smoke alarm is triggered and offer you with one-touch access to important pre-programmed emergency numbers such as the police, fire department or persons. Naturally, all these will work in conjunction with a companion app installed on your smartphone. 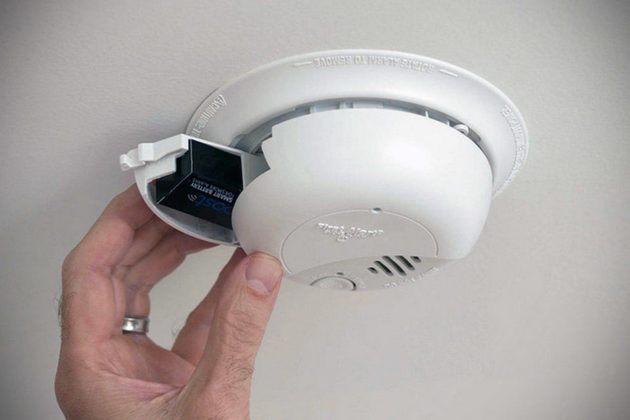 Essentially, the Rooster Smart Battery looks like a regular 9V battery complete with the necessary terminals, but instead of alkaline or carbon-zine cells on the inside, it is packed with a microcontroller, a low-power WiFi chip, and lithium cells with its own power management, which Roost said will provide around 5 years of life, as opposed to having to switch out a fresh battery yearly for each smoke alarm. As of now, this battery can only be used with your existing smoke alarm and carbon monoxide detector that uses a 9V battery. But it is not quite a reality, at least not at the time of this writing. It is now on Kickstarter seeking financial backing to take it to production where you will be able to pre-order one for $35.

While $35 may sounds like an insane sum to fork out for a battery, it might still be a more cost-efficient way than dropping $99 or more for purpose-built smoke detectors like those coming from Nest. And since the battery can last 5 years or so, you will also save yourself the hassle of having to change batteries yearly, though we can’t say the same on the money saving aspect. But remember, you’re actually getting into the whole Internet of Things and that itself, should make the 35 bucks worthwhile. However there a couple of things you may want to note before hitting that green button: Roost Smart Battery is only available to backers in Canada, U.S. and EU, and it will only be shipped in June 2015. Continue reading for a pitch video to learn more.