In an era where smoking is frowned upon, there is hardly a need for a lighter – much less one that cost a whopping $41,000. Yes. You heard that loud and clear. A lighter could cost that much and you know it can only come from one brand: S.T. Dupont. The Parisian company has been around since like, forever, and it is no stranger to making lighters that look and feel uber exquisite, but the S.T. Dupont Complication Lighter here takes lighting up in luxury to a whole new level.

What makes the S.T. Dupont Complication Lighter stands out is its very Da Vinci code design – lend to it by a watch complication with no less than two hundred parts and 9 rubies to boot. The watch complication is not there just for show, mind you. It is totally functional. Though, granted, the complication is not there for time telling. Instead, it serves as a safe of sort that keeps the lighter from being fired up by unauthorized person. Only upon entering the correct three-digit secret code, the lighter will then open to reveal the flame spewing mechanism. 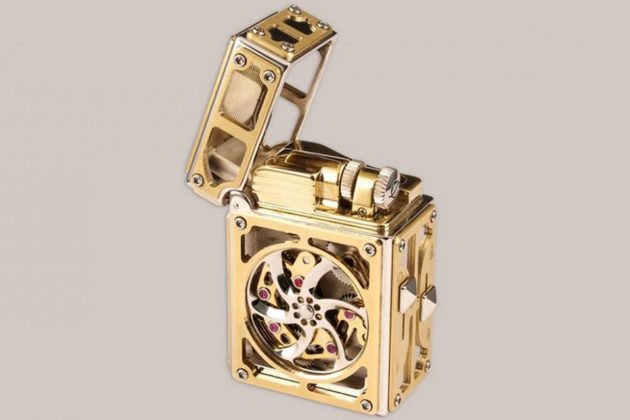 And that’s not even it. Though by default it has a soft flame like most lighter of such nature, but with a flick of a switch, it can transform into a fiery torch. Also thanks to the watch complication, it gets the unique skeletal body that allows you to take a peek inside at the inner workings of the ultimate opulence in lighter technology. Finally, rounding up the package is S.T. Dupont’s D Signature on Roller, a Palladium finish, and a lacquer wooden box to stow this epitome of luxury lighter.

Clearly, it is a lighter not for lighting campfire or firewood. It is a lighter for times when one need to light up a comparatively luxurious cigar. Even cigarettes will not be worthy enough, IMHO. Come on, folks, we are talking about 41-freaking-grand here. Surely, Marlboro is not a good fit, isn’t it?

Additional image: How To Spend It.