As Samsung’s mobile division is dealing with the aftermath of fiery phone, alleged exploding washing machine and shady dealings, it is business as usual for other aspects of the business and that’s a good thing because, we won’t want to see another good competition goes down the drain. Speaking of business as usual, that already has been happening non-stop as the company tries to cope with unfortunate blunder (in the history of modern gadgets, that is) and it is no exception for Mobile World Congress 2017, happening in Barcelona, where the electronics giant has announced a new trio of tablets, Galaxy Tab S3 and Galaxy Books.

Kicking of the trio is the 9.7-inch Super AMOLED Galaxy Tab S3 that flaunts a 2,048 by 1,536 QXGA display and a quadcore Qualcomm Snapdragon 820 chip, backed by 4GB RAM and 32GB storage which is expandable up to 256GB with microSD card. Also found on the Galaxy Tab S3 are a 13MP autofocus main camera with flash and a 5MP front-facing shooter, LTE Cat. 6 support, USB Type-C (3.1), a 6,000 mAh battery with fast charging support, 4K videoing (30fps) and playback (60fps), and the usual suspect of connectivity and sensors.

That’s not to say the difference between the two models are minor. In fact, the disparity is rather huge that makes one think: why bother? Anywho, while both gets the 7th-gen Intel Core processor, the 10-inch model is with m3 dualcore clocking in at 2.6GHz and the 12-inch, is a dualcore 3.1GHz i5. That’s not all, the entry level model only has one 5MP front-facing camera, but the higher end Book gets two: a 13MP autofocus rear-facing shooter and a 5MP front-facing item.

Speaking of which, both devices record only in FHD, but they are capable of playing back 4K video (@30 and 60fps). Finally, the 12-inch device has two USB Type-C (3.1) as opposed to one found on the 10-inch model. Of course, with the Books, you will find the usual servings of connectivity and sensors as well. Also introduced with the tablets is Samsung’s pet product (as far as mobile touch devices are concerned, that is), S-Pen. Calling it as a refined S-Pen, this stylus now boasts a finer 0.7mm tip and increase pressure sensitivity. As with most products unveiled at major trade shows, prices and availability are a mystery for now. 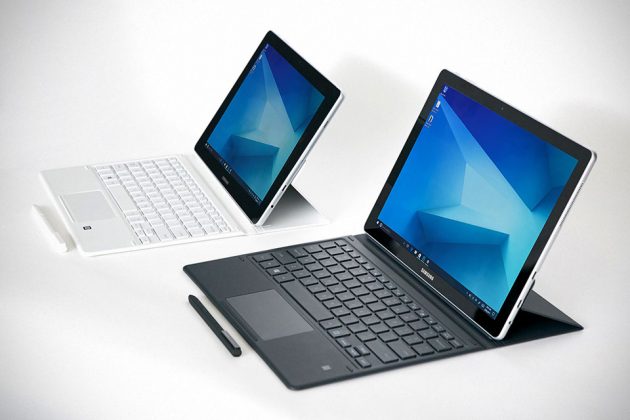