now, here’s something refreshing coming from SEAT: an Ibiza CUPRA with the roof chopped off. the SEAT Ibiza CUPSTER, as it is called, is an one-off project car based on the Ibiza CUPRA, so basically it is the CUPRA less the roof and boy, it is looking pretty awesome. powered by the same 1.4 TSI engine, producing 180PS and coupled to a DSG dual-clutch gearbox, the Ibiza CUPSTER’s visual difference is not limited to the roofless design; overall, it is much lower and wider, which gives it the extra sporty appearance and it also loses the windscreen, giving it an extremely low profile look. in place of the windshield is a wraparound strip window and on the inside, the seating is 80mm lower than the series-production car, that should keep the bugs out of the occupants’ faces. 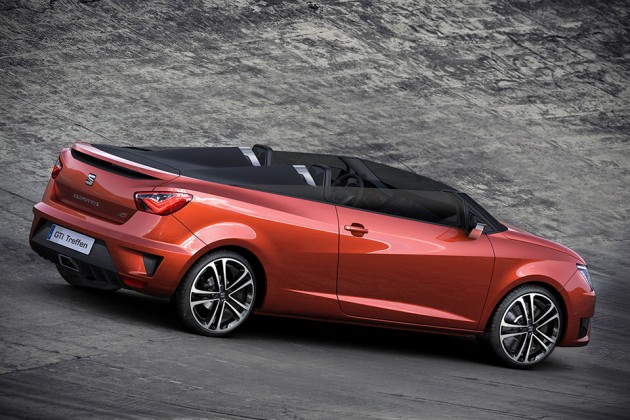 the concept wears a custom orange paint job and rides on 18-inch wheels, while the inside is largely based on the Ibiza Trophy race car. speaking of the cabin, the interior is upholstered in black Alcantara and features a steering wheel swathed in pure aniline leather, a dark grey cover over the classic ‘double bubble’ style seats, minimalist instrument dials, and low-slung bucket seats. so why the CUPSTER moniker? well, because it is a CUPRA that is also Roadster. the SEAT Ibiza CUPSTER Concept was developed to mark SEAT Ibiza 30th anniversary, which SEAT will be showing off at the Wörthersee Meeting in Reifnitz, Germany, happening between May 28 and 31, 2014.