LG is drumming up the LG G3 quite a bit before its official announcement next week. it has done it with the LG x Harman Kardon collaboration Bluetooth headset and the South Korean electronics maker is at it again with the LG QuickCircle Case For LG G3. we haven’t seen the case in person, but to us it is a rather poor attempt to drum up interests for the new upcoming flagship that’s probably going to see an UI update too. on the side note, we hardly think the G3 will need any ‘drumming up’ at all. the QuickCircle is basically a protective flip case for the soon-to-be-unveiled LG G3 that works similar to the QuickWindow case announced for the LG G2 last year. in fact, you could say it is almost identical to the predecessor accept that the window is now in, well, circle.

however, it does have a vanity trick up its sleeve: whenever the case is opened or closed, or if there is an incoming call or text message, a soft, white circular glow will be emitted around the circular window to “accentuate the beauty of its circular design language”, LG said. though we have no idea where that ‘smart lighting’, as LG calls it, draws its power from. like the QuickWindow before it, QuickCircle allows you to quickly check on information like time and weather, take photos, control the music, access the device setting, make/take calls, receive and send text messages, and even get an update of their health – all without having to flip open the cover. 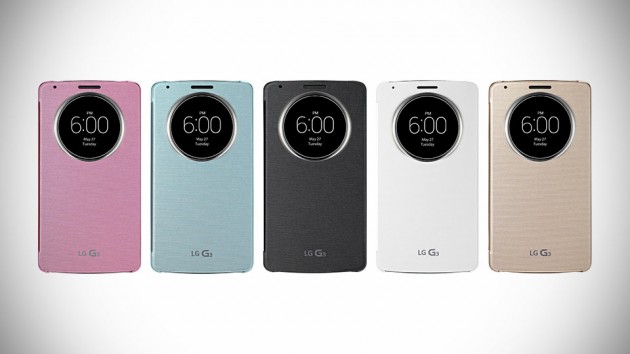 as a testimony of how serious they are with this little circular window, LG will be providing interested developers with a SDK to customize their LG G3 smartphones to perform customized functions with the QuickCircle Case. that said, the case is essentially the vehicle to showcase the capability of the updated UI that will be shipping with the new LG G3. hit the jump for a virtual demo of the QuickCircle Case, but before that, you might be interested in this little piece of quote from LG Electronics with regard to this case:

“The Case is designed to protect the side edges of the G3 and provide the best ‘grip-ability’ while maintaing the G3’s original sleek lines.”