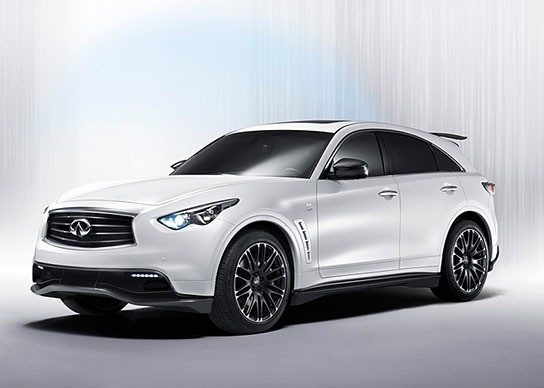 for obvious reason, Formula One and crossover utility vehicle don’t usually mix but this notion has taken a turn with the reigning Formula One Champion-endorsed Infiniti FX, the Sebastian Vettel Infiniti FX. ahead of the Frankfurt Motor Show next month, Infiniti has unveiled the first image of the Sebastian Vettel Infiniti FX. based on the face-lifted Infiniti FX50, the Sebastian Vettel edition bears a handful of exterior additions such as roof spoiler, lower front bumper with what looks like daytime running lights and side skirts. these aerodynamic additions appear to be in black, which presumably would be in carbon fiber material. also noted is the missing roof rack and new set of wheels. however beyond what we could see from the image, technical info is still lacking. though, i am incline to think that under the hood, there might have some tweaks to the already powerful engine. the vehicle will be officially unveiled by Infiniti’s brand ambassador Sebastian Vettel who also had a hand in the design of this concept vehicle. click on above image for larger view.
[ad#Google Adsense-text-468×60]