Remember the flying security drone we featured a while back? Well, while those are guys are still pitching the idea to consumers, Japanese security specialist SECOM is ready to dish out one for a cool 800,000 Yen (about US$6,600), plus a 5,000 Yen (US$41) monthly security service fee. Though we suspect, this is won’t be as autonomous as Galileo’s bold concept. Anywho, talks about this private security drone started years ago, but it is only recently that it sees fruition. Similar to Alpha, this flying security guard will take to the sky if a break-in is detected and its onboard laser sensor enable it to track moving subjects and even determining the distance. 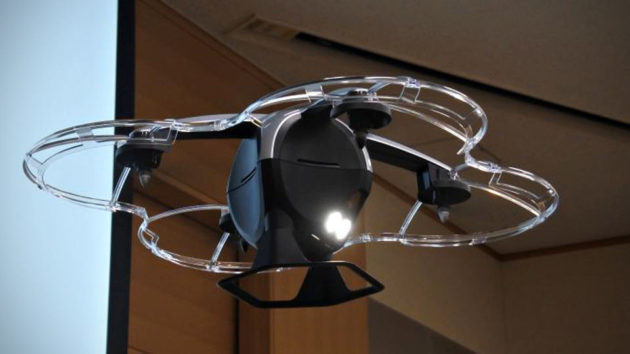 But the whole idea is not to merely scare the perpetrators away; it will record the evidence of the criminal deed by chasing the intruders to capture their faces and vehicle license plates if automobiles are involved. Though this little darling robot (though, not quite ‘little’ as you can see in the video below) here is not going to break any air speed record, as it tops out at a leisure 6 miles an hour. Looking at the price, it is obvious that SECOM Security Drone is not for average homes, but if you live in a palatial property, I am sure the amount could just be spare change and in such instance, I am also quite sure SECOM will have no reasons to deny you of your security needs.