Forget about selfie stick or the desperate act of stretching your arm to capture a selfie or welfie, because AirSelfie is here to help. So what the heck is AirSelfie. Well, it is an imaging drone, designed specifically to capture selfie/welfie. I know. You probably would sneer and said, “that’s not even new.” Actually, it kind of is because AirSelfie is designed from the ground up to be extremely – like really, really portable and as such it is part of a smartphone cover. When not in use, it slips into the included smartphone cover without the need for foldable parts. Everything, including the four brushless motors that enable it an altitude or a distance of 20 meters (66 feet), is packed within the smartphone-size drone which in itself, is quite an engineering feat.

A built-in battery pack, rated at 270 mAh, affords it 3 minutes of flight/hover time and recharges in just 30 minutes. An optional powerbank integrated mobile cover allows the charging to be carried when docked inside the mobile cover. It also touts one-hand flight operation through an iOS or Android app, along with in-flight stability system that allows it to go autonomous, hovering in position while a selfie delay timer mode triggers its onboard 5MP “optimized for social media” camera to capture selfie that actually has a background and welfies that everyone’s in the frame. Captured images are saved on a 4GB microSD card and ready to be shared on social media sites.

AirSelfie weighs a scant 52g (about 1.8 ounce) and packs a host of sensors, plus its own 2.4G WiFi for communication between the mobile and the aircraft. If what AirSelfie touted is true, this could be the only selfie camera you will ever need. The convenience offered by its size is already a win in our book. Not surprisingly, many folks thought so too and has contributed nearly 150K euros on Kickstarter to realize this awesome flying camera. Speaking of which, if you are keen, a pledge of €179-269 (US$189-284), depending on the options and how soon you back the campaign, will secure yourself a unit slated for March-April 2017 delivery. Take a look at the pitch video below to learn more. 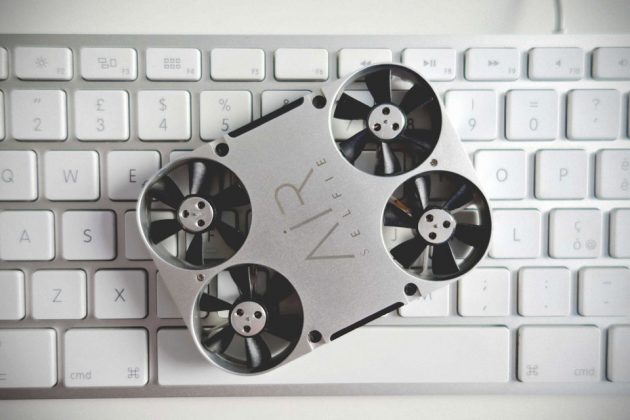