Autonomous vehicles are the buzz words of 2015 and they will be for many more years to come until it becomes roadworthy, but before that could happen, a startup wants to make baby stroller autonomous. The idea is, pushing your baby around relegates you to, well, just pushing. You can push and run so you get to exercise at the same time, but what Smartbe Self-Propelled Baby Stroller proposes to do is to let you trail behind the baby, whether you are jogging or walking – handsfree. Sensors onboard detect your presence behind (with the help of your phone, we assume) and power itself ahead of you or follow you as you move forward or backwards. 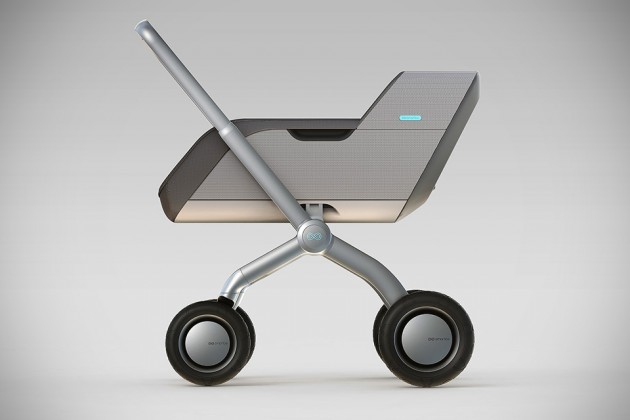 The stroller’s motors draw the required juice from a 6-hour battery and the same battery is also use to power a host of other onboard gizmos like the built-in rocker, bottle warmer, wireless speaker, baby monitor, retractable canopy and the automatic folding system. As with many of today’s gadgets, the entire system is managed via your Android or iOS smartphone and smartwatch. The idea of letting a stroller has its way can be an uneasy one, but Smartbe reassures that they have addressed the safety issues, including the possibility of a runaway stroller, which will be stopped with a “stop cord” that hangs from the parents’ wrist to the stroller. A tug on the cord, which could mean the stroller is taking off without you, will cut the stroller’s motors and stop it in a snap. Also include is the proximity sensor to ensure you don’t lose your kid like Mr. Bean did. If the stroller and the parents strays too far apart, your smartphone will alert you.

Smartbe has taken to Indiegogo, seeking to raise $80K to fund the production, but the response so far is nothing more than lukewarm. We are not surprised cos’, as mentioned, the notion of autonomous baby stroller probably scare the hell out of any parents and that’s not to mention that each ride cost a whopping $3,099. And the promised delivery date of April 2017 doesn’t quite help either. Also, the lack of real product is a real concern too as we all know, the crowdfunding community has seen one too many over promised product that have failed miserably.