Anything that flies is at risk and while radio controlled flying contraptions like the now-popular drones do not have human lives onboard, they are still a pain if you were to lose it. I know how it felt cos’ I have personally lost one in the wild a couple of years ago, though that wasn’t a drone; it was a helicopter. Still, a lost is a lost. The nature of multi-rotor setup does not allow for auto-rotation like traditional helicopters which would afford a somewhat cushioned landing in the event of rotor failures and it is this prospect of losing hundreds, if not thousands of dollars worth of equipment that prompted aerial photographer Michael Pick to invent SmartChutes, an automatic deploying parachute for multi rotor drones such as the quadcopter. 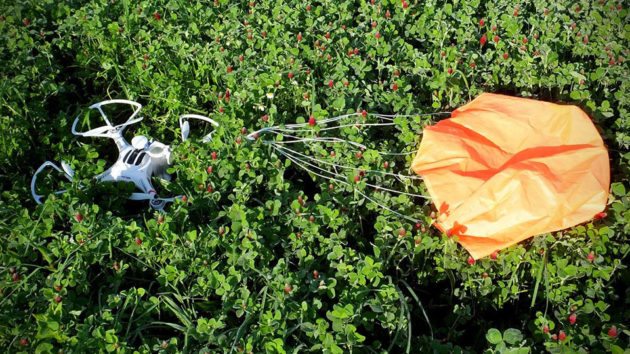 The chute consists of two parts: the sensor component that recognize free fall, tumbles, or flips as in-flight emergency and a parachute canister where the 36-inch parachute stays stashed until deployment. The operation of this drone-saver is completely automatic; all you need to do is to prime the sensor and a few seconds later, you’re good to go. The system operates off its own battery and will add “under 4 oz or 113g” of weight to your flying photography rig.

Obviously, anything that can save precious equipment from a disastrous ending is all good on our books, but there are a few things to note: the system only support craft no heavier than 4 lbs or 1.8 kg and while it touts a super quick deployment time of 350 milliseconds, the chute does require time to fully open and hence, it is recommended for flights of at least 160 feet (50 meters). Anything less will not get the benefit of air cushioning from the parachute. Plus, there are two things that kind of bothers us and they are aesthetic and weight distribution.

It is not exactly the most elegant of ways cos’, after all, there will be a canister measuring 4.25 inches protruding from your drone, albeit that it will be in carbon fiber, and since it has to be mounted to the side, it will inevitably throws the balance of the craft off which you have to compensate by the fine-tuning via the transmitter if it supports it, actively counter it in-flight or by shifting the payload to offset the added load on the opposite side.

SmartChutes is on the last leg of its crowdfunding campaign on Kickstarter with four days to go, but so far, it is last than half way to its goal. Unless miracle were to happen, it looks like it is not getting anywhere. However, we hope Michael’s invention will get the due attention, and perhaps, improved on the idea and make a stronger come back. In case you want to be part of the factor that contributes to the miracle, then you’d be glad that early bird prices for the automatic parachute system are still available at $130. Catch the product pitch in the video below.