if our smartphone can be made waterproof as standard, why not the tablet? well, if you have been wishing for that to happen, it has and that tablet is the Sony Xperia Z2 Tablet. billed as the world’s slimmest and lightest waterproof tablet, the Z2 is built to IP55/IP58 ratings, making it impervious to dust and can take a dive down to 1.5 meters of fresh water for up to 30 minutes. the latter is provided that all ports and covers are firmly closed. taking the center-stage is the 10.1-inch Full HD TRILUMINOS display for mobile with Live Color LED (also the world’s first, btw) powered by Sony’s X-Reality for mobile.

processing power comes from a quad-core Qualcomm Snapdragon 801 chip, clocking in at 2.3 GHz and it has a good 3GB of system RAM to make sure things go pretty damn fast. since Sony is touting it as the “best ever tablet entertainment”, it makes sense to incorporate quality sound and for that, you have the S-Force Surround Sound, along with the world’s first Digital Noise Canceling technology in a tablet that is said to cut ambient noise by up to 98% when paired with the MDR-NC31EM Digital Noise Canceling headset. the Z2 Tablet also boasts super fast charging, thanks to the incorporation of Qualcomm Quick Charge 2.0 technology. the latter allows the device to charge up to 75 percent faster over devices without this technology.

speaking of battery, it has a 6,000 mAh lithium polymer battery, which collaborates with Sony’s Battery STAMINA Mode to offer up to 10 hours of continuous multimedia usage and over 100 hours of music playback. also onboard is a 8.1MP camera with Exmor RS for mobile and a 2.2MP front-facing HD camera. for the record, this tablet is seriously anorexic – it measures a mind-boggling thinnest of just 6.4mm and weighs in at just 426g for the WiFi model and 439g for the LTE/3G model. by comparison, iPad Air is 7.5mm thin and tips the scale at 469g and 478g for the WiFi-only and the WiFi + Cellular model, respectively. pricing has not been announced yet, but it will roll out globally sometime in March 2014. 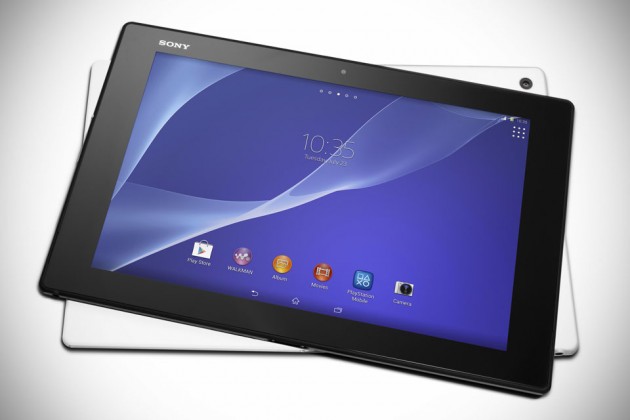