Music is an art, but the device that lets you enjoy hardly is, but with the Basswall 200-watt Bluetooth Speaker in a Painting, music enjoyment could be art because you could, for the first time, listen to art and admire a painting, which is also an art itself. Confused? Don’t be. Basswall is a Bluetooth speaker system, but instead the plain old music player design, it masquerade itself as a painting where the painting could be anything you desire. From the front, Basswall looks just like any other wall art, but behind it, it is packed with a pair of 19mm titanium dome tweeters, two 70mm coated cellulose mid-range drivers, a dual subwoofer array and tuned reflex bass port, and rounding up with a Class D amplifier to produce 200 watt of audio nirvana. 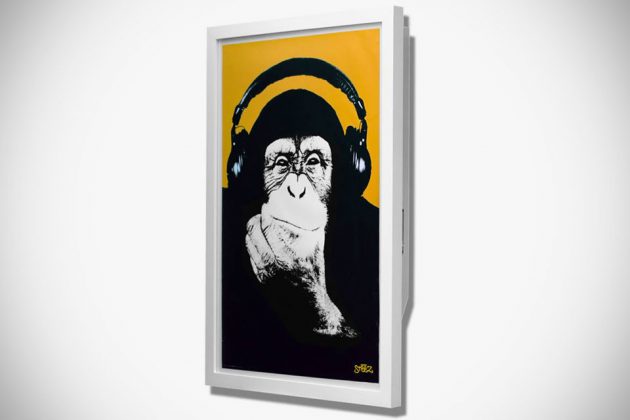 Despite its rather thin form factor, we hear that it has pretty amazing sound and apparently, the secret lies in a “large cavity with special sound damping material” that tricked the bass frequencies into thinking the cavity is much larger than it really is, while a finely tuned bass port aids in increasing the effect exponentially. By hanging this piece of painting on the wall, it leverages on the ceiling and the very wall to form a 180-degree sound field, resulting in amazing, room-filling sound. Adding to the appeal is, it does not require proprietary app to start streaming music. Just paired it with your smartphone or tablet and you can spin pretty much any music that supports audio streaming. If it delivers as promised, then Basswall is indeed worthy of the title as the ultimate hide-fi.

As for the artwork, it is left to your devices. The frame fits any standard large poster size at 24 by 36 inches (61 x 91 cm) and it can be swapped as and when you feel like, and for that, we say it is a win. Music lovers have been putting with visually loud and sometime intrusive speaker systems, pretending to love them for what they are for the longest time and to that, we say, enough is enough; it is time to hide the player and enjoy the music.

If you love the idea, then you may want to consider backing Basswall on Kickstarter to help bring it to life. It is not going to be cheap though. Expect to shell out anything between £349 and £549 (approximately US$455-716) for one. And if it gets funded, you will have one less eyesore in your humble abode in November 2016.