The idea of having whiskey early in the morning is not a norm for regular folks, less you are a hardcore liquor addict, but if you reside in Seattle, you may be inclined to have sip of whiskey because Starbucks has a new caffeinated beverage infused with whiskey flavor and it is only available at Starbucks Reserve Roastery in Seattle. But don’t worry, you will not be reeking with alcohol, nor will you be high on spirit because what you get with the Starbucks Reserve Whiskey Barrel-Aged Sulawesi Coffee, as it is called, is merely the flavor and not the alcohol. 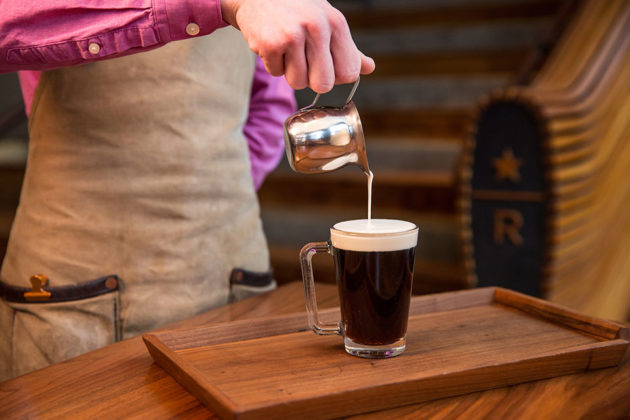 This is due to fact that the whiskey barrel-aged beans are roasted – a process which inevitably removes any trace of alcohol, leaving only the flavor when grounded and brew into the specialty drink. So, I guess you could say it is the best of both worlds. That’s, of course, if you have thing for coffee and whiskey. Starbucks Reserve Roastery started serving Starbucks Reserve Whiskey Barrel-Aged Sulawesi Coffee on March 6, but it won’t be there forever. According to the horse’s mouth, it will be available “for a limited time,” though it is not clear how long is this limited time.

Two specialty beverages, namely Barrel-aged Cold Brew and Barrel-aged Con Crema, based on the whiskey barrel-aged beans are being served at the said store, but if you prefer to savor the flavor at the comfort of your own home or your office’s pantry, you can choose to bring it home as hand-scooped whole bean coffee. I am not a huge fan of Starbucks, but this Starbucks Reserve Whiskey Barrel-Aged Sulawesi Coffee sure sounds tantalizing. Yum…