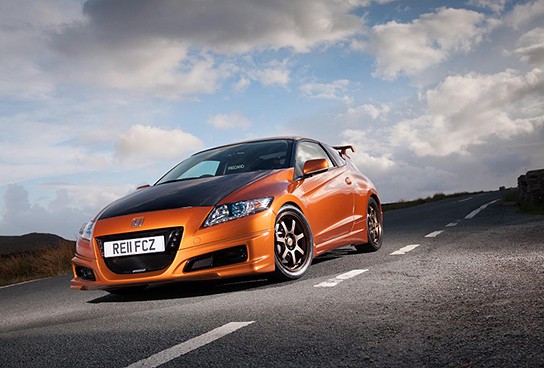 if you think that hybrid cars are lacking of the performance, then perhaps the Honda CR-Z MUGEN concept might change your perception somewhat. souped up by UK-based MUGEN Euro, the CR-Z hybrid’s 1.5-liter petrol engine and IMA electric motor is blessed with a supercharger that pushes the car’s power up from 122 HP (91.2 kW) to 198 HP (146 kW) and an increase of torque from 128 lb-ft (174 Nm) to 181 lb-ft (245 Nm). this stunning example is slated to make its debut at the Goodwood Festival of Speed to be held in West Sussex, England this July.
[ad#Google Adsense-text-468×60]

performance-wise, the supercharged CR-Z MUGEN with a mid-tune engine is said to have a 0-60 mph sprint time that is “similar to that of the Civic Type R.” so i am assuming it to be around 6.5 seconds plus, minus? MUGEN plans to achieve its original overall performance goals by further increasing the power by 15 percent and by trimming the its weight by 50 kg (110 lbs) of the chassis. Colin Whittamore of MUGEN Euro has assured that even with the performance hike, the fuel consumption tests has “also been encouraging.” MUGEN Euro has chose to retain the three driving modes and the concept has achieved a 50+ mpg (about 21 km/liter) consumption under the ‘eco’ mod. in place of the ‘sport’ mode is the ‘MUGEN’ mode, which is said to achieve a “mid-30 mpg” consumption.

the CR-Z MUGEN concept is, well, a concept and therefore it is too early to see any indication that if it will ever make it to production but we certainly hope it will become a reality. Type R asides, i think what the world missed from Honda is compact performance cars like the iconic EG-6 and EK-9 that made headlines during their days with its legendary B16A engines. looking back, those cars were in fact the epitome of sports compact cars and that is what i will remember Honda as.