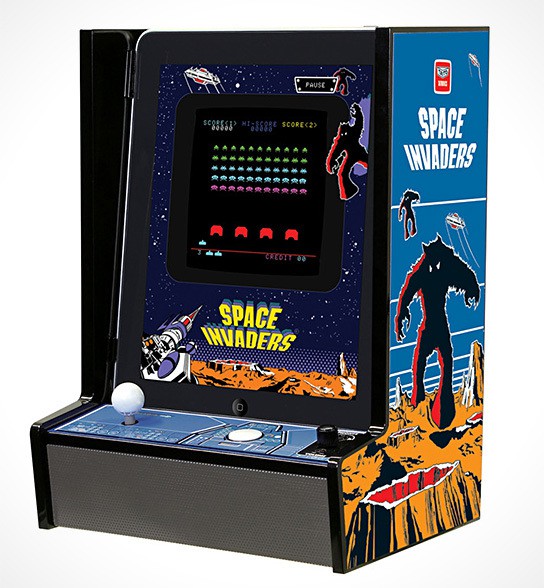 if you find that ThinkGeek’s iCade arcade cabinet for iPad is not authentic enough, then how about one from the veteran of arcade gaming, Taito, who’s best known for the arcade game Space Invaders? aptly dubbed as the InvaderCade, this official Taito product sports a single button and the familiar ball-top joystick for controls as opposed to iCade’s two buttons, which is geared towards Atari game. speaking of which, Atari also did announced something of sort but it’s more of a joystick dock than anything else. the InvaderCade is equipment with built-in speakers for some audio amplification and a headphone audio jack for those more personal gaming moments. when not used for gaming, the cabinet also doubles as a stand and charges your iPad when it is docked.
[ad#Google Adsense-text-468×60]

it is reported that the Taito InvaderCade is heading for Japan for a price tag of ¥15,800 (about US$205) which is pretty pricey considering that the iCade only cost $99.99 now. but i guess you can’t really put a price on the authentic feel of the good old arcade, albeit it being miniaturized. the InvaderCade even comes with the artwork that once grace these popular arcade machines. no word on if this tiny wonder will make to the global market but seasoned online shopping veterans will no doubt know how to get their hands on Japan-only products (that’s if money is of no object). hit past the jump for a short video intro of the Taito InvaderCade in Japanese language, which i thought should be of no cause of concern even if you don’t understand what the sweet voice was trying to convey.

NOW READ  My Arcade Atari Gamestation Plus: Your Favorite Atari Games In On Sleek, Modern Console