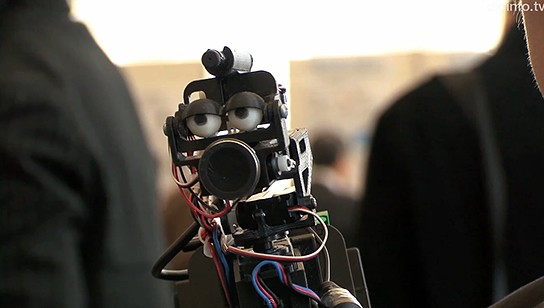 sometime shopping alone can be quite uninspiring. if we have something like the TEROOS, things would be entirely different. a group of researchers and members from the Keio University demonstrated the TEROOS, a shoulder mounted avatar for telecommunication at the Interaction 2011. essentially, the TEROOS is a miniature video chat robot that is mounted on your shoulder and allows your friend who is miles away to shop and chat with you. chatting is via video chat program such as SKYPE. the robot is equipped with a camera, mic and speaker which are necessary for any audio/video communication, and it is also capable of moving its head through six degrees of freedom.

the speaker is directional, hence aside from strange stares from passer-by, there are no worries that the response from your friend will be broadcast aloud. further, the camera operates within the wearer’s field of vision, thus giving the sensation of two person is standing next to each other. unlike telepresence, where the user can see the other party, the TEROOS’ user can’t. however, it has the ability to generate expressions which can be input by the person using the computer. much like emoticons, the computer user can choose from the range of expressions on the computer and communicates his or her feelings to the wearer. of course, the wearer gotta remember to turn off the avatar before heading on to the restroom.

movement of the robot is sent to a smartphone, which in turn, pass it to a microcontroller via Bluetooth signals. check out the video of an introduction by one of the team member and of course, TEROOS is getting some attention too.