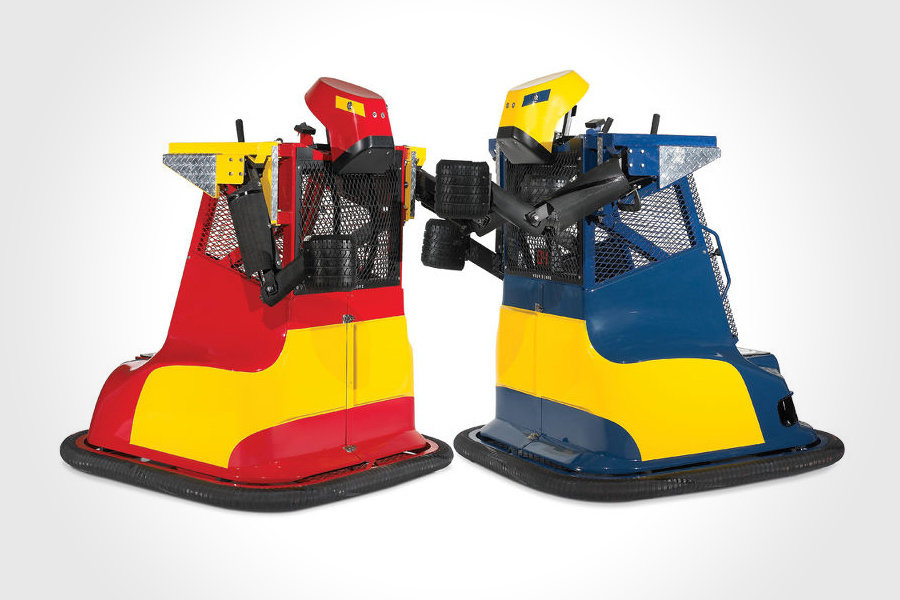 a champion boxer often has to face with routine cardio exercises and having to answer dumb questions from the media, and that’s not including the inevitable pain that you have to endure while you scuffle your way to the championship title. those are not the worst bits cos’ as a boxer, you run the risk of suffering from concussion as a result of a blow (or two) on your head. the very thought of a 100-lbs punch landing on our temple sends shudder down our bones but not if you can do your favorite bout with your best pal, each in your very own safety cage cockpit. meet the Bionic Bopper Cars: the awesome robots that you and your friend can sit in and send chin-lifting uppercuts without suffering from any form of injury. it works like a bumper car, except that it has pneumatic-powered tire-tread-fisted arms that are capable of sending punches at each other’s head…er, i meant robot’s head, and a front-mounted display on each robot’s mid-section display the successful scoring punches. you don’t even need a referee for this kind of head smacking fun.
[ad#Google Adsense-text-468×60]

each robot is fitted with a Honda petrol engine that powers its hidden wheels, which allows it to traverse forward, backward, and execute left and right spins, while a built-in rechargeable 12-volt battery provides juice to the onboard electronics. it sure sounds like a hell lot of fun but let it be warned that this is no ordinary folks’ toy as it has a price tag of $17,000 each but you probably won’t be getting just one machine, so therefore, you would have to fork out a cool $34,000 for a pair of these fighting machines – a price that could potentially deliver a concussion-inducing blow even before the bout starts, unless you are Richie Rich.