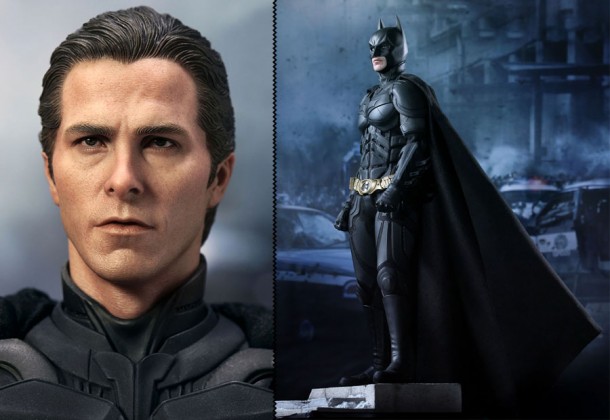 it’s another few more days to go before The Dark Knight Rises hit the silver screen, so we could imagine it must have been a long, agonizing wait for fans of this big screen cape crusader. even if the movie has hit the big screen, we would also imagine that wouldn’t be enough to quench the thirst of mega fans of Christian Bale’s Batman/Bruce Wayne character. so the fix is easy: grab yourself The Dark Knight Rises Sixth Scale Figure from Hot Toys. following the tradition of the hyper-realistic series, you will find a newly developed head sculpt in the amazing likeness of Christian Bale (you know, wrinkles and all) and of course, an alternate head in the form of the Dark Knight’s. measuring approximately 32 cm (about 12.6 inches) tall, this collectible features Parallel Eyeball Rolling System (PERS), three interchangeable lower faces, 32 points of articulation, 3 pairs of interchangeable gloved palms and slew of toys, including a battery-powered light-up electronic gun, that the cape crusader used to deal with the baddies. the package comes with deluxe stone-like light-up figure with steps, along with Batman/Bruce Wayne nameplate and the movie logo. oh, if you already have a scaled Batpod, good news for you. it also comes with an adaptor to connect this Batman with your Batpod. pretty awesome, don’t you think so? The Dark Knight Rises Sixth Scale Figure is presented by Sideshow Collectibles and is available for pre-order with a $259.99 sticker. a few more look after the break.