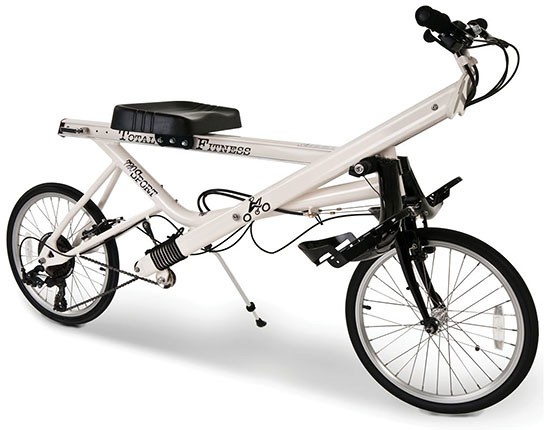 i can’t remember when was the last time i hit the gym but as i recall, among the sea of exercise equipment, the rower was my favorite. mainly because it has a video screen upfront that shows your ‘boat’ against a competitor that kept my eyes occupied but that’s where the thrill ends. at the end of the day, i’d still be stuck in an air-conditioned room with bunch of folks smelling of sweat. alternative to the gym rower, is to hit the water for some real-deal rowing but that’s quite hassle, unless you happen to live next to a lake. for urban folks, The Rowbike might be the answer to monotonous rowing in the gym and the real deal rowing experience.
[ad#Google Adsense-text-468×60]

i find the prospect of ‘rowing’ on land quite intriguing. April Fools is over so, no, this isn’t a joke but a real rowing machine. perfect for urbanites like us. The Rowbike is the creation of Scott Olson, the inventor of Rollerblade inline skates and it is essentially an exercise rower on two wheels. instead of paddles, rider pull and push the handle bar like rowing a boat. the rowing action is transmits to a chain-driven rear wheel giving the bike the propulsion. a pair of fixed footrest provide the leverage for rowing while the padded seat glides smoothly along the frame as you ‘row’ along.

just in case you feel the need to go faster or slower, the thumb-operated gearshift on the handle gives you seven speed to choose from and it has something a real rowing boat doesn’t has – brakes. the front and rear brakes actuated by hand ensure you can stop your boat, i mean, bike in time. your fantasy to row on dry land doesn’t come cheap. the Rowbike will set you back at $1,400 and is available at Hammacher online store.

NOW READ  5 Workout Accessories To Use On The Go