It is unlikely that Batman will announce his presence on a mass transportation system such as a ship and surely, billionaire Bruce Wayne won’t either, but for fans of this fictional crimefighting cape superhero/brilliant detective, it will be perfectly fine to be cruising on a classic Batman themed big-ass ferry like the Italy-based Tirrenia ship’s Sharden. In a partnership with Warner Bros. Consumer Products and obviously, DC Entertainment, Tirrenia has begun decorating the sides of DC superheroes-themed Tirrenia ships. Work started earlier this year when Tirrenia’s ship, Sharden, had its sides painted with the classic Batman graphics.

On one side, features Batman giving his archenemy The Joker a good one, while the other is the dynamic duo featuring the cape crusader with his trusted sidekick, Robin. Tirrenia is hopeful that the newly DC superheroes-themed shops will lend the fleet a fresh look, revitalizing them while making them more “attractive and suitable for families with children.” It is quite an marketing effort for a ferry service, to be honest. I mean, a ferry service is an everyday transportation and so, it feels kind of out-of-the-ordinary to be spending this much time and money to get it, you know, rejuvenated. 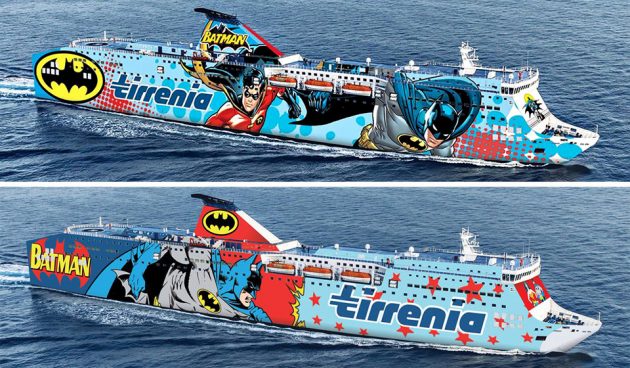 We wouldn’t know how much they have spent and will be spending. It is safe to say it won’t be cheap, taking into consideration the downtime each boat has to put up with. Moreover, it is not a short term partnership; the Sharden is the first of the many ships that will be superheroes-themed. Speaking of which, we noticed the appearance of Wonder Woman on Tirrenia’s website and therefore, we can safely assume she will be on one of the other ships.

Sharden has since been launched and doing its round, plying between Sardinia and Sicily, and another ship, the Nuraghes, has been undergoing the same treatment since April 2017. Following the Nuraghes, in 2018, three other ships in the fleet will also be refreshed and works will continue through to 2019 where two other ferries will be inducted into the DC superheroes family.

The DC superheroes-theme is not limited to the exterior; images of DC superheroes will also appear along walkways and lounge areas of the ships, and according to our source, there’s also a DC superhero game room for families, though we are not sure if this said room will be available on other Tirrenia DC superheroes-themed boats. You can watch the boat’s launch video after the break.