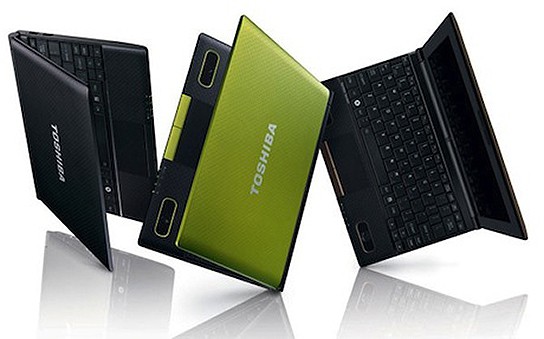 was it just me feeling that the netbook market has somewhat ‘tone-down’? perhaps it might be due to the overwhelming attention to tablet over the last few months – which has taken the spotlight away from the once darling of portable computing. in anyway, Toshiba has announces a duo of new netbook, the NB500 and NB520, to be available sometime first quarter of 2011. generally, both netbooks will spot a 10.1-inch LED-backlit TRUBRITE displays with a screen resolution of 1,024 by 600, up to 250GB of hard drive storage, 802.11 b/g/n WiFi and VGA webcam. connectivity includes three USB 2.0 ports (why not 3.0?), Ethernet, as well as a 2-in-1 card reader. needless to say, one would be the entry-level netbook, while the other would be the ‘higher-end’ model.

there’s no words on the pricing as yet but we expect some hints on the pricing in coming month. seriously, with all the rage for tablets in the market right now, i wonder if there’s a market for netbooks. somehow, consumers has turned their attention to tablet more and hence, any announcement of netbooks isn’t going to turn heads much. just some months ago, any casual conversation would involve notebooks in the topic. these days, its “have you seen that tablet?” – well mostly.