judging from the limited number of diving-related gears here, it is obvious diving is not right up my alley and for good reasons, though. i have an irrational fear of open waters (thanks to JAWS for scaring my life during my childhood. i hate you Spielberg!) and my understanding (or misunderstanding?) of the risks surrounding the use of scuba diving gears and among the many other ‘worries’ doesn’t quite make things better, but if the TRITON Portable Oxygen Respirator becomes a reality, i might just change my stance. why? well, at least my worries about regulating breathing (my biggest worry, actually) will be non-existence and my worry of great whites can come later.

the TRITON works like the contraption you might have seen in movies; you know, a small cylindrical device which divers stuck to their mouth for breathing. the only difference is, the TRITON is a little larger than science friction and instead of the sci-fi miniature tank with seemingly endless supply of air, it is actually artificial gills that in theory, can supply endless oxygen for as long as the micro battery (another concept in the making) has the juice to offer the onboard microprocessor to do its job.

designed by Samsung Art & Design Institute student, Jeabyun Yeon, the TRITON is obviously still at the concept stage, but according to Yeon, the artificial gill technology is actually under development in Korea (the South, obviously). it works by extracting the oxygen from the water through a filter that has “fine threads whose holes are smaller than water molecules”, after which a microprocessor would then condense and store the extracted oxygen in a compact holding tank, ready to be breathed in.

honestly, i am totally intrigued by this concept and it is certainly exciting to see mankind taking the next step in underwater breathing apparatus, which has largely remain unchanged for decades. you can check out Jeabyun Yeon’s Behance page to learn more. 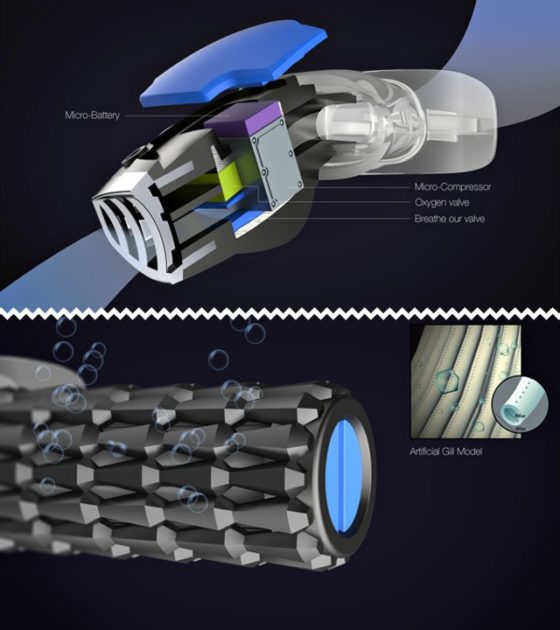 Behance via Dude!!! I Want That…