What’s your impression of a pizza delivery bike? Probably ‘boring as hell’ because, it is. But that is before you have seen the Turbo Hero Extreme, a pizza delivery motorcycle based on Indian-made Hero Xtreme 150-turned-drag racer. Well, I guess that would make it a drag-racing pizza delivery bike, wouldn’t it? This particular attractive bike was the masterpiece from Dubai-based VR Customs and an entry to Dubai’s Bikers Cafe 3rd Build Off Competition, an annual event where three brand new motorcycles are given to local customizers to see who can came with the most brilliant custom. Not surprisingly, Turbo Hero Extreme is a winning entry. 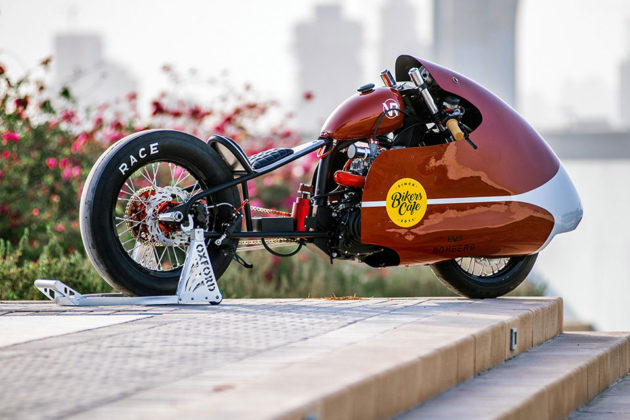 The funny thing is, the original donor bike can hardly make anything near good quarter mile timing, but still that does not stop Marc and Alan of VR Customs from lending the pizza delivery bike the drag bike design. Then again, with a bike looking this fabulous, we hardly care about speeds. As it does not crawl like a snail, it is good in our books. According to the rules of the competition, the engine will have to remain stock, but doesn’t mean the original 150cc unit cannot be further crank up. Skipping the cam swap which is against the rules, the duo managed to drop a small turbocharger, a PE30 Keihin carburetor, along with silicon intake intake pipe, and a new oil tank and pump to up the engine efficiency and performance. 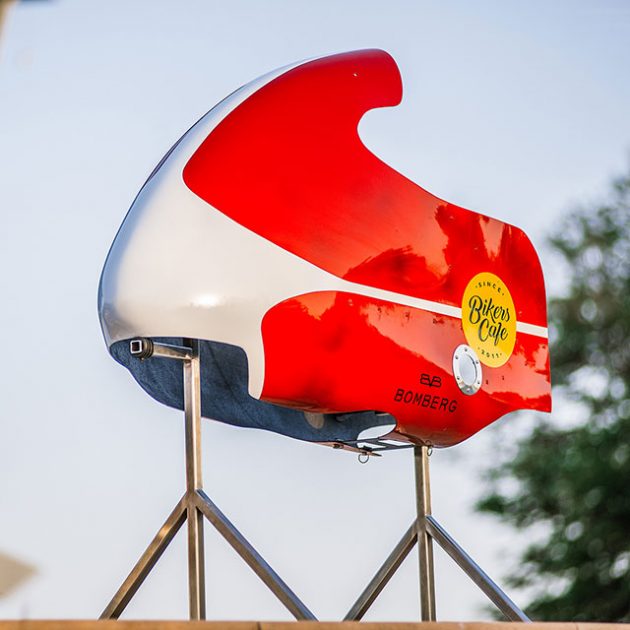 In addition, a custom frame boasting higher quality steel, a redesigned lower engine mount and brackets – lots of it, were custom fabricated and put together to create the lusty form you see here. A variety of other parts pulled from various motorcycles where thrown in too, including front forks and brake caliber from a Suzuki GSX-F750, a 17-inch Honda CRF supermoto front wheel, a seat pad from Honda CB750 (on the hand-shaped seat pan), and a rear wheel composed of a Honda CRF supermoto hub and an 18-inch CRF MX wheel. The original front caliber is transplanted to the rear wheel, but now paired to CRF wavy brake discs as the front brake does. 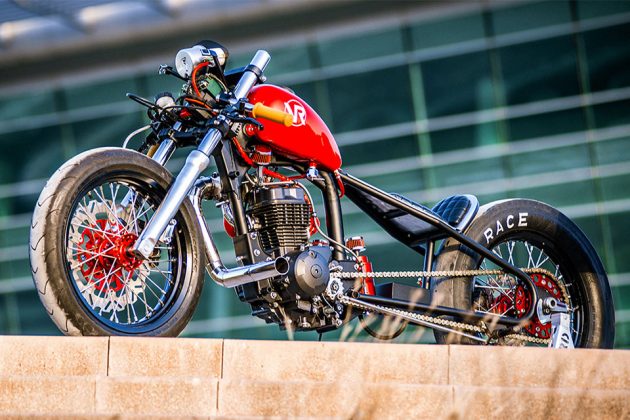 Being a true custom, tons of custom intermediaries, including brackets, mounts, adapters and whatnot were custom to ensure every thing fits as the custom bike builders have imagined. Finally, a custom-fitted modern replica of a 1950s MV Agusta fairing, a custom-built dash with tachometer and boost gauge, a two-gallon peanut tank (a left over from another project), aftermarket Triumph Bonneville rear sets, a Triumph 675 rear master cylinder, custom triple clamps and steering stops, new gear shift linkage, throttle tube, braided brake lines, and a Metzeler Racetec rubber and an M&H vintage drag slick rounds up the package.

But seriously, do you even care what goes into it? I know I am not because all I know is this thing is a sight to behold. You can learn more about Turbo Hero Extreme Custom Motorcycle by VR Customs and view more images on BIKEEXIF. 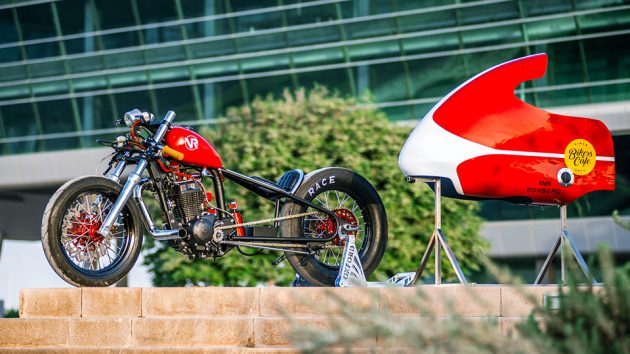 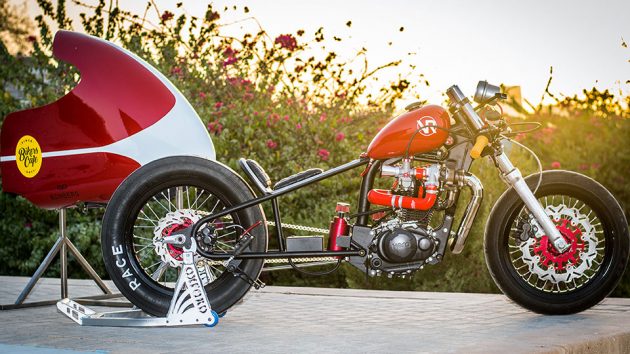