For most people, Turtle Beach is best known for its gaming headphones, but do you know the Elmsford, New York company actually dabbles in something a little more advanced? HyperSound is one such advanced technology the company is developing and recently, it has officially unveiled the world’s first transparent directional speakers using its HyperSound technology. Now, directional audio is certainly not the newest of news, but what Turtle Beach did was achieving directional sound using just transparent pane of glass. HyperSound sound delivery system generates highly directional, narrow beam of audio, much like how a flashlight directs a beam of light into space. The result is pretty amazing; you can hear it for yourself in the video after the post. 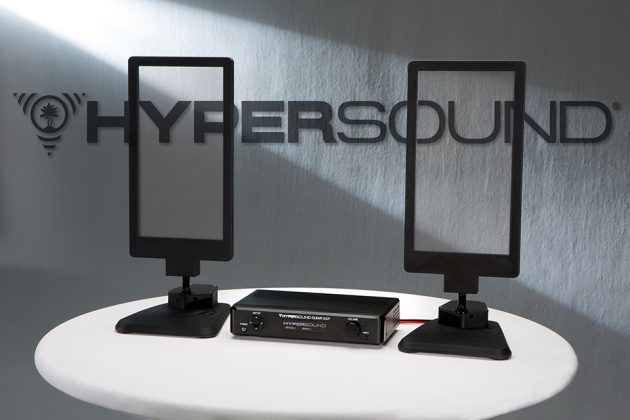 According to Turtle Beach, HyperSound Glass has a designed similar to that of a touchscreen glass, but in the case of HyperSound, multiple layers of transparent films and electronics worked to generate a beam of ultrasound to deliver crisp, clear audio at targeted listener. We are still pretty amazed by the result. Depending on the direction you are, the audio is either on or off, though you can still hear faint audio when you are off the direction of the speaker. Otherwise, the transition is pretty much seamless. But what use has it got? Juergen Stark, CEO of Turtle Beach Corporation explains:

Though he conceded that the technology is still in development and what HyperSound can do is still pretty much just ideas. Basically, it develops the technology and awaits for the industry to see what it can do with it, well, at least that’s how we understand it. Anywho, Turtle Beach will be showing an early prototype of HyperSound Glass at this year’s Electronics Entertainment Expo, taking place at L.A. Convention Center between June 14 and 16. So if you want to experience glass-based directional audio in person, make sure you hit up Turtle Beach’s booth at this year’s E3. In the meantime, you can catch the demo in the video after the break.