You know how Facebook lets you add ‘stickers’ on your uploaded photos? Well, now Twitter has it too, but there’s a particularly useful ’twist’ to it. Dubbed #Stickers, it allows you to ‘stick’ stuff like emojis, props and ‘accessories’ anywhere on the photos, but that’s where the similarity with Facebook’s stops. Tweeted image that has a sticker slapped on it is searchable and discoverable. In other words, the sticker is essentially a visual version of the good’ol hashtag. This means, tapping on a sticker will bring up a series of Tweets by people who happen to use the same sticker. Pretty cool, huh? Basically, #Stickers is a funner way to discover stuff on Twitter. 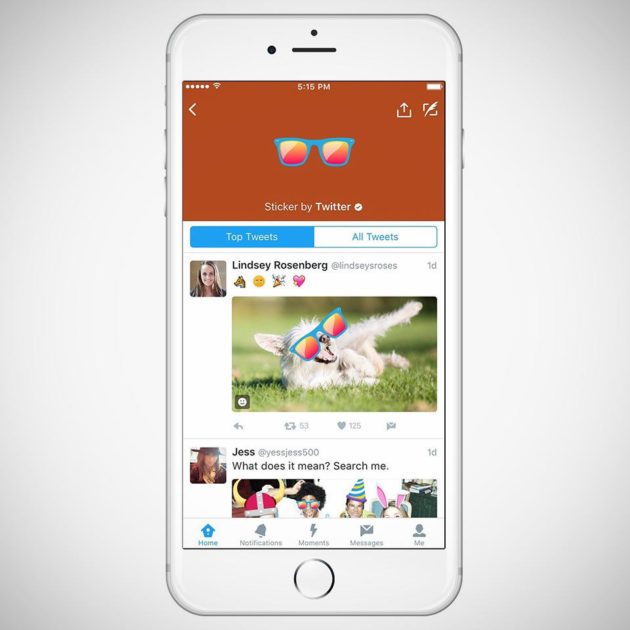 While it may be fun, we do see a pro and a con. Pro being it eliminates wrong hashtag used due to misspelled word and con, as we see it, the sticker will kind of block the image, albeit a tiny one (the sticker is resizable and rotated, btw). But hey, some like their images unadulterated and so, even a speck could turn out to be an eyesore to them. Just saying…

A library of stickers in several categories will be offered and this include Accessories, Animals, Food, Technology, Flags – just to name a few. In addition, there will be a Featured category highlighting Live Stickers “tied to world events, holidays or other themes.” You know, the usual Twitter’s doings, just that it will be in visual form.

Twitter #Stickers will be available on Twitter for iOS and Android in coming weeks and rest assure, what you stick on mobile platforms, it will be totally viewable on Twitter.com, as well as in syndication. So I guess, it’s a hurray?

Coming soon! Unleash your creativity by adding fun #Stickers to your photos on Twitter: https://t.co/Ph92Oivyhy pic.twitter.com/NZoM6nHenD

Connect your photos to the world with a visual spin on hashtags: tap #Stickers to peel back a fun new way to search. pic.twitter.com/YVy7r53Nja