Count the objects you have lost in life so far and I am sure umbrella ranks high up in the list. I don’t have this problem, though. Mainly because I carry a foldable that slips in my messenger, but for everyone else who opt for a full size brolly, the odds of it mysteriously disappear is pretty high. Whether it was coaxed away by a friendly stranger, or was mis-identified by a wrong owner who lead it away anyways, it doesn’t matter because this concept umbrella, aptly called Umbrellocked, aims to end this age-old woe once and for all.

Designed by Zhang Suo, Daishao Yun and Wang Wen-Year, the Umbrellocked is exactly what it sounds like: it is an umbrella with lock, beautifully integrated into the end of the J-shaped handle. To secure the Umbrellocked, all you have to do is to extend the number lock, loop it around an object such as a railing or even an arm chair, and clicks it to the vertical portion of the J-handle. Scramble the numbers and Umbrellocked is not going anywhere with anyone, ever.

The idea of combination key is actually quite clever for two reasons: first, there’s no need worry about losing the physical key and second, it adds a sleek, modern and some what mysterious touch to the brolly. It is an umbrella that’s going to disrupt the umbrella stealing market, but alas, it is just a concept design. We are not even sure if it will be picked up by any umbrella makers. 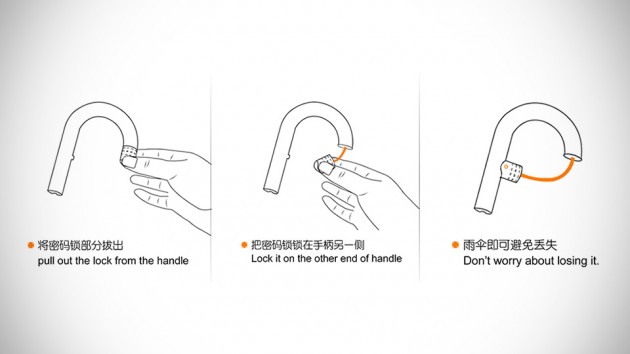