Good news, fans of Harry Potter. Your wait to experience the magic of Hogwarts is over. The Wizarding World of Harry Potter at Universal Studios Hollywood is finally open. The newest attraction opens to L.A. Philharmonic’s performance with award-winning composer John William at the helm, synchronized to an awe-inspiring 3D digital lighting projection on the Hogwarts castle. The spectacular perform was round up with a grand display of fireworks. The park’s newest ‘world’ officially opens on the April 7, which saw some of the cast members of the Harry Potter franchise as well as celebrities like Vanessa Hudgens, Mindy Kaling, Billy Bob Thornton and more, joining the celebration. The mayor of Los Angeles, who apparently is a huge Harry Potter fan (he had six wands and brought one with him), made an appearance too. 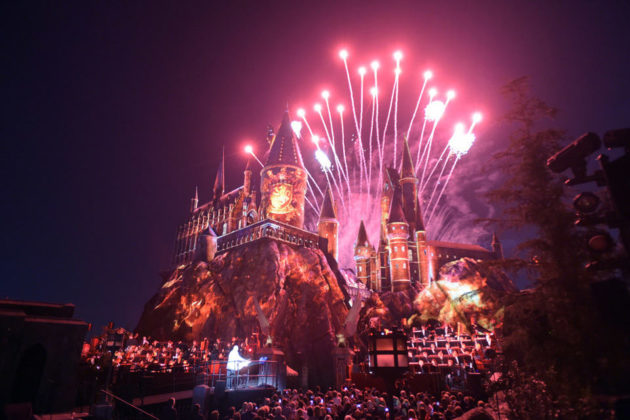 So now that Hogwarts has been plucked out of Highlands of Scotland, so to speak, and appears in L.A., fans can expect all-thing Harry Potter to happen in this magical world. The best part is, you need no invitation to be accepted at this Hogwarts; all you need is to pay the park entrance fee and you are in. There’s no actual wizard school, neither are potion making classes available, but there are theme park requisite rides and amenities like shops and eateries – all Harry Potter-themed, of course. The level immersion is made possible by faithful replica of the visual landscape as described in the novel and depicted in the movies.

Expect to be greeted by snow-capped roofs, cobblestone streets, stone archway, Hogsmeade and ‘locals’, which happens to include a train conductor who welcome you to Hogwarts. Thrill rides (or maybe just ‘ride’) seekers can look forward to “Harry Potter and the Forbidden Journey,” a hyper-realistic 3D-HD ride that boasts “groundbreaking robotics ride system” and “Flight of the Hippogriff” where fans ‘ride’ on the mythical creature through a series of spirals and dives, passing the pumpkin patch and Hagrid’s hut. No words if the Grand Staircase is included, though, neither are moving portraits confirmed.

When you are done with the rides, you can hit up food and beverage outlets like the Three Broomsticks, Hog’s Head Pub, Magic Neep and Butterbeer carts, or eight retail venues, like Honeydukes, Ollivanders, Owl Post, Zonko’s Joke Shop, Wiseacre’s Wizard Equipment, Dervish and Banges, Gladrags Wizardwear and Fitch’s Emporium of Confiscated Goods. So, Potterheads, get ready your credit card (or maybe cash, whichever you prefer) because we bet you will probably be buying one too many wand from Ollivanders, or have more Butterbeer than you can handle, or both. Universal Studios Hollywood