As part of its sustainability initiatives, UPS revealed that it is working with UK-based tech firm, Arrival, to developed a fleet of electric vehicles to be trialed in London and Paris. This pilot fleet of 35 electric delivery vans (or trucks, as they are commonly referenced to as in Stateside) are lightweight composite vehicles that have a range of 150 miles (240 kilometers).

Each truck will be equipped with Advanced Driver Assistance Systems (ADAS) to share the burden of driving with the driver. The system will cover safety and supposedly help to “reduce driver fatigue,” though UPS did not specifically say how. Arrival and UPS has been working on the electric delivery vehicle since 2016 which are expected to be trialed in the real world before the end of the year.

Beside sporting the UPS color and branding, these EVs are not something we are accustomed to seeing. They are, how do you say? Rather cartoonish. For some reasons, I can’t stop looking at it. OK. It is cartoonish and sleek all at the same time. Nothing has been detailed on its inner workings, nor are the features revealed. 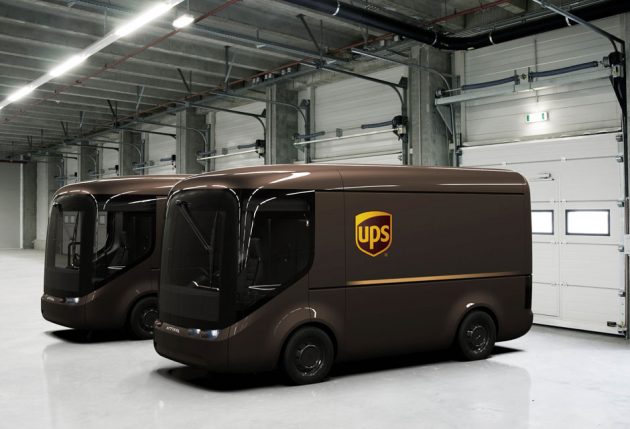 Unbeknownst to many, UPS is not new to EVs. It has started long before it becomes a “trend.” In fact, it had explored EVs as far back as 1930s and in 2001, it reintroduced EVs to its delivery operations. As of now, it has over 300 EVs and nearly 700 hybrid EVs making delivery in Europe and in the U.S.

In addition to these up and coming super cute electric vans, UPS has also installed what the company described as “radical new charging technology” at its central London deport in Camden that is capable of charging the entire fleet of EVs without “expensive upgrade to the power supply grid.”

All these were done to minimize its dependency on fossil fuel – a lifeline which the business largely dependent on. Well, if you ask me, EVs are only as good if the electricity that they are tapping on is generated cleanly (like from solar or wind farm, et cetera).