with the Wacom Cintiq Companion and Companion Hybrid tablets, design creatives now has the perfect excuse to work out of a coffee shop or cafe. why not? since you no longer need to be tethered to a desktop PC or a laptop, so you are perfectly fine to be drawing inspirations from anywhere outside of a constricted cubicle. the Wacom Cintiq Companion is a full-featured Windows 8 tablet which is capable of running full versions of creative software such as Adobe Photoshop and Corel Painter. the Cintiq Companion Hybrid, on the other hand, is a traditional desktop Cintiq when connected to a Mac or PC, but as a standalone device, it is Android-powered tablet, albeit being a pretty large one. aesthetically, the duo looks pretty much like the current Cintiq 13HD, but that’s just about where the similarity ends.

packed inside the sleek, brushed aluminum chassis, these devices are equipped with 13-inch Full HD displays with wide viewing angle, ports for peripherals and other devices, and comes bundled with Wacom Pro Pen that boasts 2,048 levels of pressure and tilt sensitivity. powering the Companion is a third-gen Intel Core i7 processor, bolstered by 8GB RAM and Intel HD Graphics 4000 chip and it is available in two models: a 256GB SSD model that runs on Windows 8 and a 512GB SSD version running on Windows 8 Pro. as for the Cintiq Companion Hybrid, it is driven by NVIDIA Tegra 4 quad-core processor and runs on Android 4.2 Jelly Bean, and is also available a choice of 16GB or 32GB models. 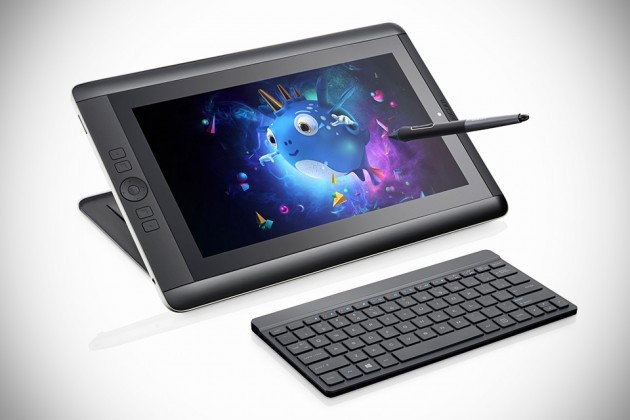