Skip to content
19
SHARES
ShareTweetSubscribe
About This Article
This story is brought to you in collaboration with The Lead South Australia. The article is written by Jack Baldwin and was first published on The Lead on June 04, 2015.

WHEN paramedics or emergency personnel discover a patient who has suffered massive facial or airway trauma, often in situations like a car crash, they may have to perform a cricothyrotomy, which involves stabbing a tube into the patient’s throat so they can breath.

It’s a procedure you want them to get right.

But in these life-threatening situations a paramedic or doctor may have only ever performed the procedure on a training device. It’s therefore doubly important that this device teaches them the correct technique in an accurate and realistic way – it’s life or death.

Many doctors will now be training for complicated cricothyrotomies on a German-built Crico Trainer called ‘ADELAIDE’ designed by Robert White and Daniel Weiss in South Australia.
“The procedure, it’s not something that most doctors will have to use,” says White, one half of the WHITE + WEISS design team.

“No one really wants to stick a tube through your throat, but if you need it, they need to know how to do it properly, to prevent you from dying.”

A cricothyrotomy involves sticking a needle and cannula through the Adam’s apple, inserting a guide wire through the cannula in to the windpipe, removing the cannula, making a small incision at the base of the guide wire, threading a Melker Crico kit (an airway catheter and curved dilator) on to the wire, and finally removing the wire – thus clearing the patient’s airway.

Medical students practice the procedure on any number of trainers, simulators and manikins, but as Daniel Weiss says, they are not all very realistic.

“Beyond just the student learning it, it’s about muscle memory,” says Weiss. “In an emergency when you don’t have time to think, you need your muscle memory to work.”

The realistic Crico Trainer ADELAIDE was conceived by White and Weiss during their Masters of Industrial Design at the University of South Australia in 2012. It’s a practical course with real clients who have real design problems.

“This particular project started with the University of Adelaide medical school. They teach their students all sorts of procedures on all sorts of medical trainers. They found that there’s a number of these trainers they weren’t happy with,” White explains.

White and Weiss both decided to tackle the cricothyrotomy device, although they were working separately at the time. They were put in touch with Dr Chris Acott, the Southern Hemisphere’s foremost throat and neck expert.

The two designers attended Dr Acott’s workshops at the Royal Adelaide Hospital, training with doctors, seeing how they use the simulators and using them themselves. They had access to Dr Acott’s collection of Crico Trainers, many of which they realised were “pretty average”.

“The existing trainers were pretty basic,” says White. “There was a basic neck shape with an Adam’s apple and a skin that stretches over the top. They were missing obvious stuff – like a chin – which seems like a really basic thing.”

As they watched some doctors insert a tube and the designers realised they were coming in at an angle that would be impossible on a real person because the chin would be in the way.

“Dr Acott would catch it and remind them that they’d have to come in at an angle,” says White. “But if an instructor missed that, they student is going to learn that procedure incorrectly.”

After eight weeks of designing their individual versions of an improved Crico Trainer, White and Weiss took their prototypes to Dr Acott. He liked aspects of both, and suggested they combine the two.

In 2013 the men decided to continue the project outside of their Masters course, receiving a grant from ITEK, the University of South Australia’s commercialisation arm, to develop a prototype.

They worked through eight prototypes with Dr Acott before arriving at a model everyone was happy with.

It was a significant improvement on the available devices. The chin was an obvious addition, but many other smart touches also improved the usability and accuracy of the trainer.

“It was very cumbersome to put the skin on the old devices,” says White. “Ours is slotted where it can slip through and pull taut. You can use it again and again. We also added multiple layers of skin to add more realism.” 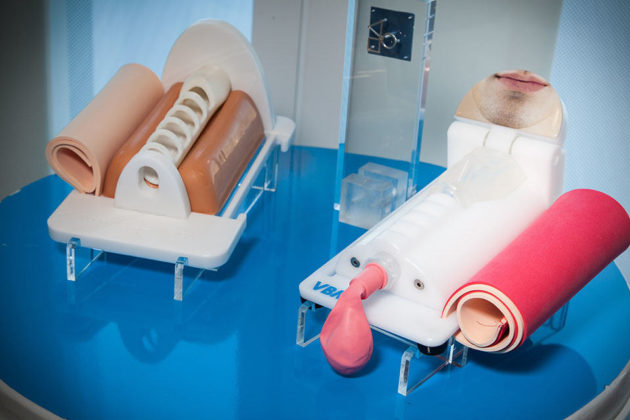 Feel is an important part of the procedure – doctors have to find the Adam’s apple quickly and accurately to perform a cricothyrotomy. The team also added additional layers of skin and a squishy adhesive layer to enhance the feel.

“A lot of simulators are designed to simulate the perfect case scenario,” Weiss says. “But you’re not going to be looking at the perfect 30 year old male every time – there might be damage or irregularities. That’s something we tried to incorporate, making the throat adjustable.”

Once the device was finished, ITEK started to shop the idea around to medical simulation companies. German company VBM Medizintechnik GmbH took an interest.

A licensing agreement was written up, and VBM redeveloped their Crico Trainer from the ground up based on White and Weiss’ design. With a nod to the simulator’s South Australian origins, they named the trainer ADELAIDE, after the capital city of the state, and attached a label crediting White + Weiss and the University of South Australia for the design.

The team also won a number of awards for their design. They received a Gold Student Award from the Design Institute of Australia, a Premier’s Award from the Premier of South Australia, Jay Weatherill, and were national finalists in the James Dyson awards last year.

White + Weiss are working together again, this time employed by the University of South Australia as industrial designers at the Hills Innovation Centre at the industry cluster Tonsley.

Their current project is a nurse call device for aged care residents living with arthritis. Current devices are ill suited for elderly people with dexterity issues.

“They can use this type of device ten to thirty times a day. Most have small, fiddly buttons. They can have a lot of difficulty pressing it,” White says.

Their device doesn’t have a traditional button but rather a soft, flexible silicon bulb with an air pressure switch. Residents can squeeze it with minimal dexterity, use their whole hand or press it against an object. It’s an attractively designed device that lights up when activated – the result of nearly a year’s work.

“It’s currently making its way towards production. It should be underway in the next couple of months, once the tooling is ordered and underway. It should be in production and on the market later this year.“